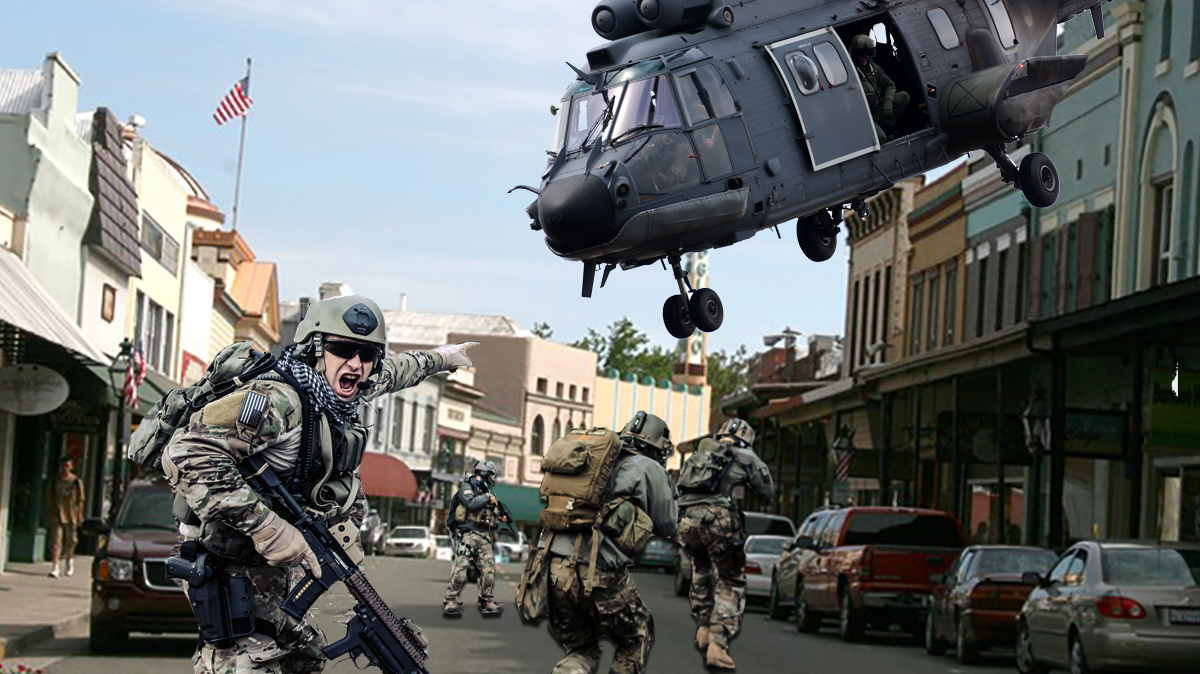 Nevada County, CA — Nevada County Police departments will be collaborating with the FBI, the ATF, Department of Homeland Security and corporate sponsor Smucker’s Jellies and Jams to conduct ‘martial law-type scenarios’ in Nevada County at an unspecified time later this year.

“This is not another ‘Jade Helm,'” explained Nevada County Sheriff Shannon Moon. “The people you will see being yanked off the streets here and there by jack-booted, militant-looking thugs in uniform in the coming months are just actors paid to look horrified and victimized. This is nothing like the Obama mission that happened in Texas a few years back. There, in Texas, it was the real deal. Not here. Not in my county, umm, not in our county.”

Jade Helm 15 was the project by which President Obama was using the U.S. Military to annex Texas to the United States in 2014 and 2015, using military force when necessary. Texans vowed to ‘not give in without a fight,’ and did, in fact, fire shots. President Trump has been silent on internal deployments, that is unless it involves immigrants at the U.S. border. This makes this latest military exercise even more concerning to conspiracy theorists.

According to Army Lt. Col. Mark Lastoria, a USASOC spokesman, the upcoming exercise called NC-17 is scheduled to take place this harvest season at several locations in Grass Valley, Nevada City, Penn Valley, Rough and Ready, and interestingly Sierra City even though it lies outside of Nevada County.

The Lieutenant made a point to mention that neither North San Juan nor Cedar Ridge will be included as they are considered “too hostile.”  The exercise is routine training to maintain a high level of readiness for heavily armed Police Forces because they must be ready to support potential missions anywhere in the county on a moment’s notice.

“Everyone knows about North San Juan,” commented Lt. Col. Lastoria. “They can take care of themselves and we reckon it’s better for everyone if we just leave them alone.”

When asked about the scope of the exercises, the Lieutenant’s face grew stern.

“The only thing unique about this particular exercise is ‘the use of new challenging terrain’ which was chosen because it is similar to conditions special operations Police Forces operate in and around marijuana growing operations.”

There will be hastily prepared “evacuation camps” staged in rural areas outside each city limits. The Beacon was assured that the camp ‘prisoners’ and ‘staff’ would also be played by actors mimicking civil disobedience.

Nevada County Sheriff Shannon Moon points out that these future operations in the county will “give The Department of Homeland Security the confidence that our region can deal with large-scale attacks of all sorts, be that ISIS, illegal aliens, people already in custody and their attorneys, or marijuana growers.”

Nevada City Police Chief J. Hausten Dill has urged that residents stay calm indoors and not panic when they see the mass arrests of their neighbors occurring, stressing, “again, the people you will see getting thrown down and cuffed en-masse are paid, actors. No real harm is coming to them unless our police dog bites somebody on accident.”