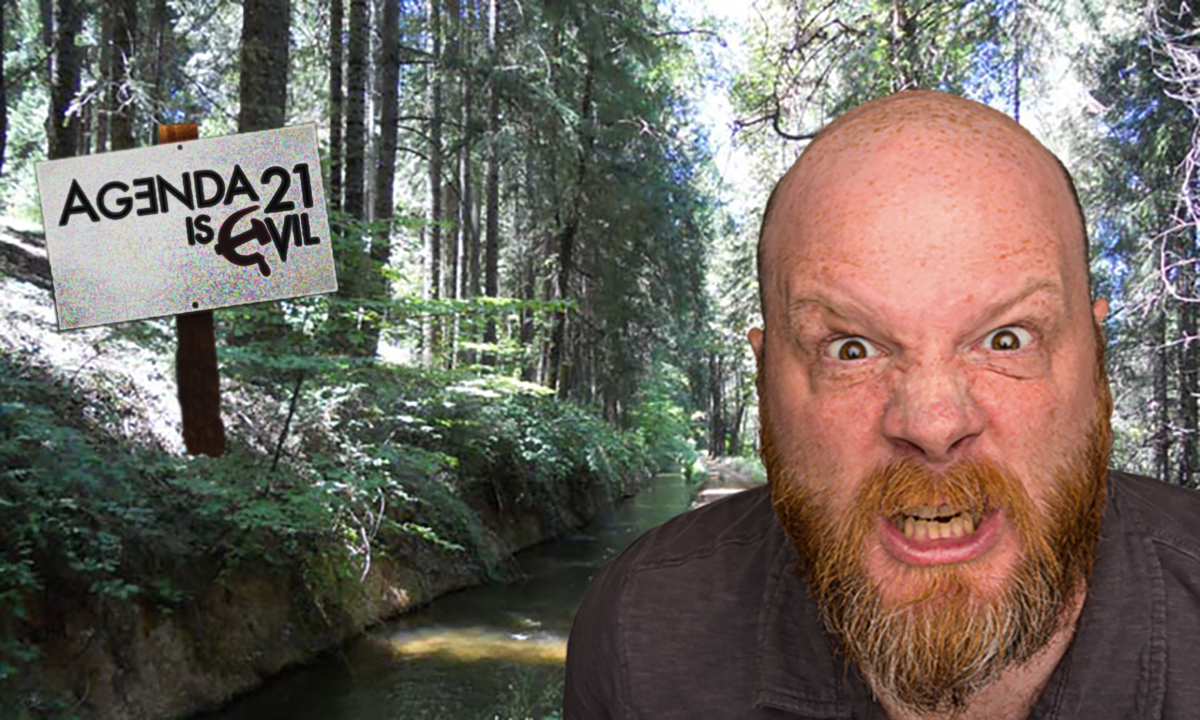 Nevada City, CA — A Banner Mountain man informed his family that he had staked a gold claim in the irrigation ditch just behind their home. Jimmie Brenton of Woodpecker Way said he’s grown tired of not being able to exercise his “God-given liberty” to do what he wants with his land. He is also tired of people walking behind his house on the Nevada Irrigation District (NID) Cascade Canal trail.

“This is all a part of their Agenda 21 plan to take over our land,” said an agitated Mr. Brenton outside his Banner Mountain home which backs up up against the canal. “The UN [the United Nations] is coming to take over our country and they’re doing it under the guise of global warming and ‘collective’ water rights. Well this here is my land, and it is my right to dredge this ditch as God has granted me. I am a free man.”

Agenda 21 is a voluntary United Nations action plan that offers suggestions for sustainable ways local, state and national governments can combat poverty and pollution and conserve natural resources in the 21st century. Several anti-Semitic, neo-Nazi groups have also jumped on the anti-Agenda 21 bandwagon, seizing the opportunity to blame the controversial document on none other than the Jews.

“Once the Zionist forces put their fangs into our communities and suck all the blood out of it [sic],” continued Mr. Brenton, “we will not be able to survive. Those pushing government control on a global level have mastered the art of hiding it in plain sight and then just dismissing it as a joke. It’s a Straw man tactic by educated elites and media moguls.”

According to his neighbors, they’ve stopped talking to Mr. Brenton due to his continuous rantings about a pending UN invasion, the Jewish banking conspiracy and “Statists” who want to control every part of their lives. Regarding his plans to start dredging the irrigation canal adjacent his property, his neighbors broke their silence to Gish Gallop.

“If that bigoted asshole starts screwing up the irrigation ditch,” said one neighbor who wished to remain anonymous for fear of retaliation, “you can bet the Sheriff and NID will be here. The thing is, this guy is looking for a fight. He wants it to justify his pathological fears.”

According to the Nevada Irrigation District, citizens are forbidden from mining the canals and face stiff fines for doing so. But even with the threats of fines and police intervention, Mr. Brenton is defiant.

“This is my body. My land and my mineral rights,” continued a mood-elevated Mr. Brenton. “If the world order wants to bring a fight to Banner Mountain, I’m ready for them. Wolverines!”