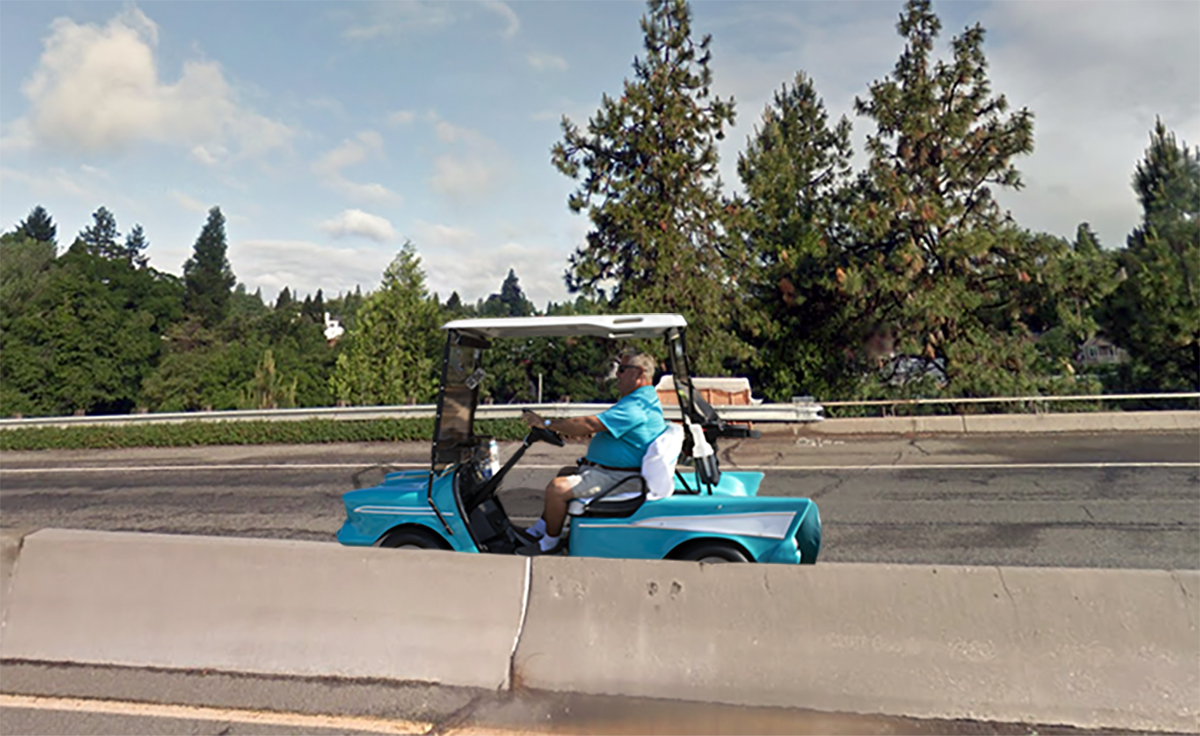 Grass Valley, CA — In a surprising development, local officials, along with the California Department of Motor Vehicles, announced that Nevada County and sections of Sierra County would allow golf carts on highway 49. And despite being between the two counties along highway 49, Yuba County was either ignored or not consulted.

“Not everyone is going to like this decision,” said Jeremy Hinkle of the California DMV. “But golf carts are a protected form of political speech in our state’s constitution. And since they meet the minimum requirements for highway usage, we’re test-piloting the program between Alta Sierra and Downieville.”

For many, driving next to gold carts on highway 49 is startling. However, there has been a growing movement over the past few years.

In 2013, a group of Alta Sierra “golf activists” launched the cheeky Cart Liberation Front. The CLF’s goal, according to its website, was to “raise awareness” about the “systematic, deep state effort to suppress the rights of law-abiding gold enthusiasts.”  The group’s founder, Moraga transplant and retiree Sal Smith says it was started for “good fun.”

“Sal likes his cocktails,” said wife Donna Smith. “The family knows not to argue with him. It’s a little like walking on eggshells, but as long as he has his drink, it tends to be quiet in the household. So I supported him with the CLF. If anything to get him out of the house.”

Critics of the CLF and Sal Smith, say the movement was created to give a handful of Alta Sierra alcoholics an excuse to drink. Whatever the genesis of the movement, it floundered for several years until 2017, when a conservative Simi Valley, CA man, Harry Nazius, 68, took over the group from Mr. Smith, who was in treatment for his drinking. Nazius decided to make the GLF “more political.”

The CLF Gets a New Leader

“Everyone around here doesn’t get what’s going on in our once beautiful state,” said Mr. Nazius back in 2017 shortly after taking the reigns from Mr. Smith. “It’s time to fight fire with fire. And the way you do that, is you use these equal protection laws in our State Constitution to our advantage.”

Although some locals are sympathetic to Mr. Nazius’s manifesto, believing that privileged white people are victimized by minorities, immigrants, transgender bathroom users, and of course Democrats, most expressed concern about sharing our highways with slow-moving golf carts.

“Look, I get it,” said Penn Valley’s Dustin Jayce Dickens. “People like me are under attack from these Sacramento Democrats. And I’m all for liberty and that kind of crap, don’t get me wrong. But I don’t want any golf carts on [highway] 49. And let me tell you, the people of Downieville aren’t gonna put up with this.”

The DMV recommends that golf carts should use emergency lanes during high traffic times and allow other drivers to pass. If that is not possible, drivers are encouraged to exercise “additional patience” when encountering the vehicles on the freeway.

“We’re asking everyone to take additional time as they make their way up and down highway 49,” continued Mr. Hinkle. “This is a process, and like any new process, there will be growing pains. We’re hoping that most golf cart drivers will be as courteous and regular drivers and move over if they’re obstructing traffic.”

This pilot program takes effect starting June 15th and will continue until November 1st when a commission reevaluates its effectiveness.