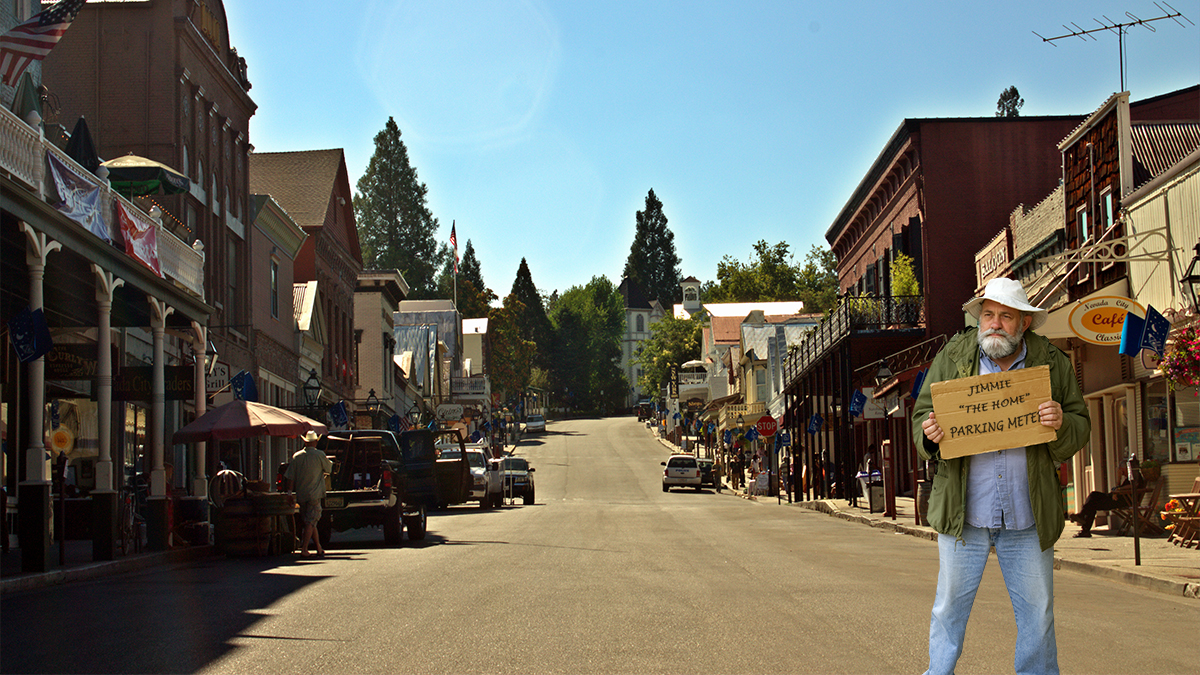 Nevada City, CA — Area homeless man Jimmie “The Home” Wilkonson has found a way to make some spare change on the side by acting as Earth’s first human parking meter. Mr. Wilkonson has taken it upon himself to station his person in front of broken meters in Nevada city’s historic downtown district and collect money from visitors and tourists.

“Well I gotta tell ya’, it wasn’t my idea. I just went ahead and did it,” said a gregarious Mr. Wilkonson speaking out in front of the Mine Shaft Saloon on Broad Street in downtown Nevada City. “I mean, what I’m trying to say is that it was Jake’s idea to do this, but you have to understand that while Jake has a heart of gold, he’s lazy as shit. He might be the laziest man I’ve ever met in my entire life.”

Nestled in the Sierra Nevada foothills in California’s former gold rush area, Grass Valley and Nevada City have become destinations for people looking to “get away” for the weekend. However, only Nevada City has decided to install parking meters which according to the City Controller, accounts for almost 40% of the quaint town’s revenue.

Complicating matters, the city has decided to install older-style meters which do not accept electronic forms of payments, leaving would-be parkers tearing their cars apart looking for dimes and quarters. According to the city, they made the decision to use the meters because they are more “historically accurate” and “better represented the 18th Century feel” area leaders sought to re-create.

But “The Home” has a solution for that.

“So I offer them credit if they can’t find a place to park,” continued Mr. Wilkonson examining his fingernails after scratching his head for a few seconds. “I tell them, ‘hey there, don’t you worry about them dimes. I’ll keep an eye out for the meter guy. I know him and will not let him give you a ticket. I charge them a small fee when they return. It’s what you business-types call a ‘win-win’.”

So far the gig is working out for everyone involved. Even Nevada City is playing along thinking of “The Home’s” actions as an attraction for tourists.

“We came up for the weekend,” said Roseville resident Daft Franklin who was visiting with his wife. “When we were pulling in, I looked at Janie and said, ‘well someone’s gonna have to go back and get a shit-load of dimes. What will these assholes think of next?’ But just then, this filthy homeless guy shows up and offers to watch our meter for us while we go out for dinner. He said he was ‘The Home’ or something weird like that. Janie was freaked out, but I told her we really didn’t have anything to lose. As we left the car, this guy just stood there like a parking meter. When we got back, he was still there.”

According to Mr. Wilkonson, he’s making more money now than he was just panhandling.

“Yep, it’s working out just fine. I’m clearing more than enough to get by and I’m happy about that.”