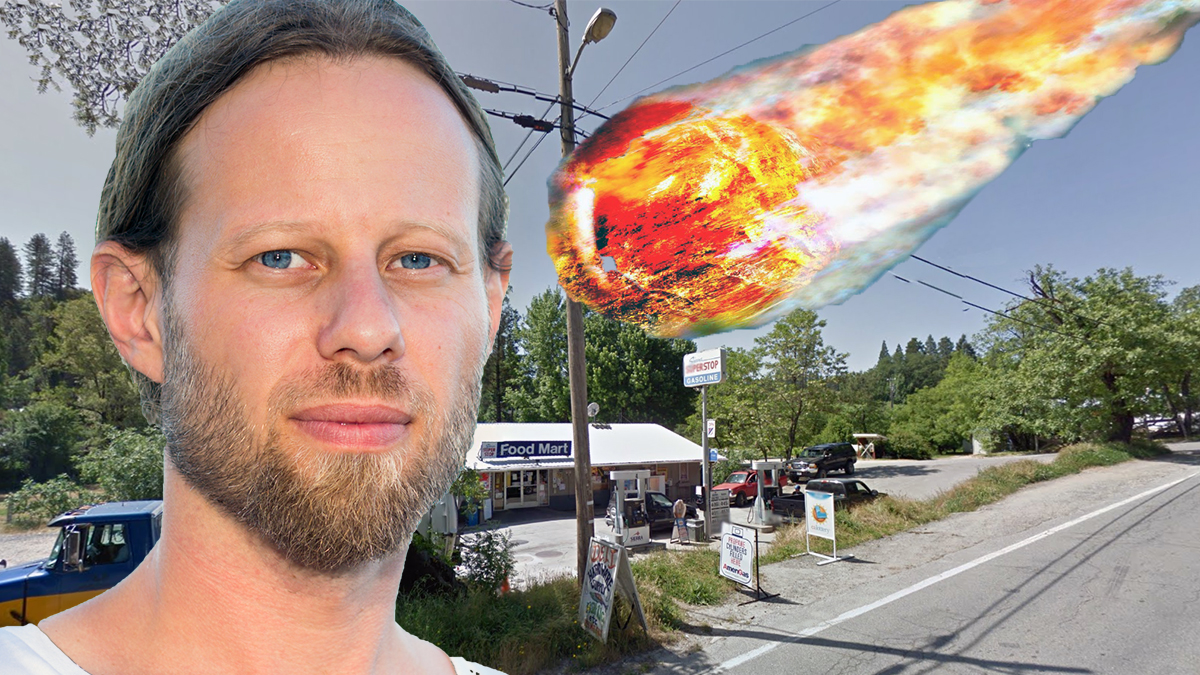 North San Juan, CA — North San Juan resident and chemtrail “researcher” Skyy Wolford announced to a small crowd in front of the Sierra Super Stop that he’s preparing for a 2.5 mile wide comet to impact his thoughts sometime this July. Playing off recent reports that a super-comet is scheduled to impact Earth in the same time frame, Mr. Wolford wanted to stress to the largely disinterested and sometimes nervous crowd that this calamitous event was really about him.

“I don’t want to say that others won’t be impacted, no,” announced a somewhat frantic Mr. Wolford in front of Shep “The Ship” Walkins’ rare rock sale. “But this is about a spiritual comet coming to aid those in this fight to control our geoengineered skies. It’s been foretold numbers of times in just about every prophetic book.”

Mr. Wolford is not a scientist, nor does he have any scientific training. He did spend two semesters at Sierra Community College studying psychology until he decided “school was not right for him.” The 34-year-old retired to North San Juan to sell fake local crystals to Yuba River tourists that he sourced from Malaysia. Since then, Mr. Wolford has focused his attention on what he feels are the most pressing issues of the day: FEMA camps, the campaign to forcibly poison us with vaccinations, and of course chemtrails.

“Again,” announced Mr. Wolford scaring two tourists from Seattle, Washington, “there is nothing to fear but transformation of ourselves. This comet is not about doom. It’s about hope.”

According to reports from Internet “Alternative” sites, a credible retired NASA astronomer has claimed that a 2.5 mile comet is expected to impact Earth sometime next year. According to this source, NASA has begun test runs of its hypothetical “Asteroid Impact Scenario.” Conspiracy theorists alike, who have this savant-like ability to thread together seemingly unrelated news tidbits into whole conspiracy theories, claim that this all coincides with increased FEMA activity and Jade Helm exercises going on in parts of the United States.

“It’s so easy to see what’s going on when you step back and pay attention,” said community organizer Sairhra Ramun in Beacon telephone interview from her Nevada City, CA home. “They’ve been preparing for this event. And now they’re executing on their plans with all the police getting armed and whatnot. It’s time for the sheeple to wake up. I and my followers have. Now it’s time for everyone else to.”

As for Mr. Wolford, he’s confident in how the situation will work out.

“I know people are starting to panic. You can see it right here in the parking lot,” said Mr. Wolford pointing at one man who was having an argument with the gasoline pump. “But it’s all going to be OK. And the scourge of chemtrails will be gone after the comet impacts my brain.”