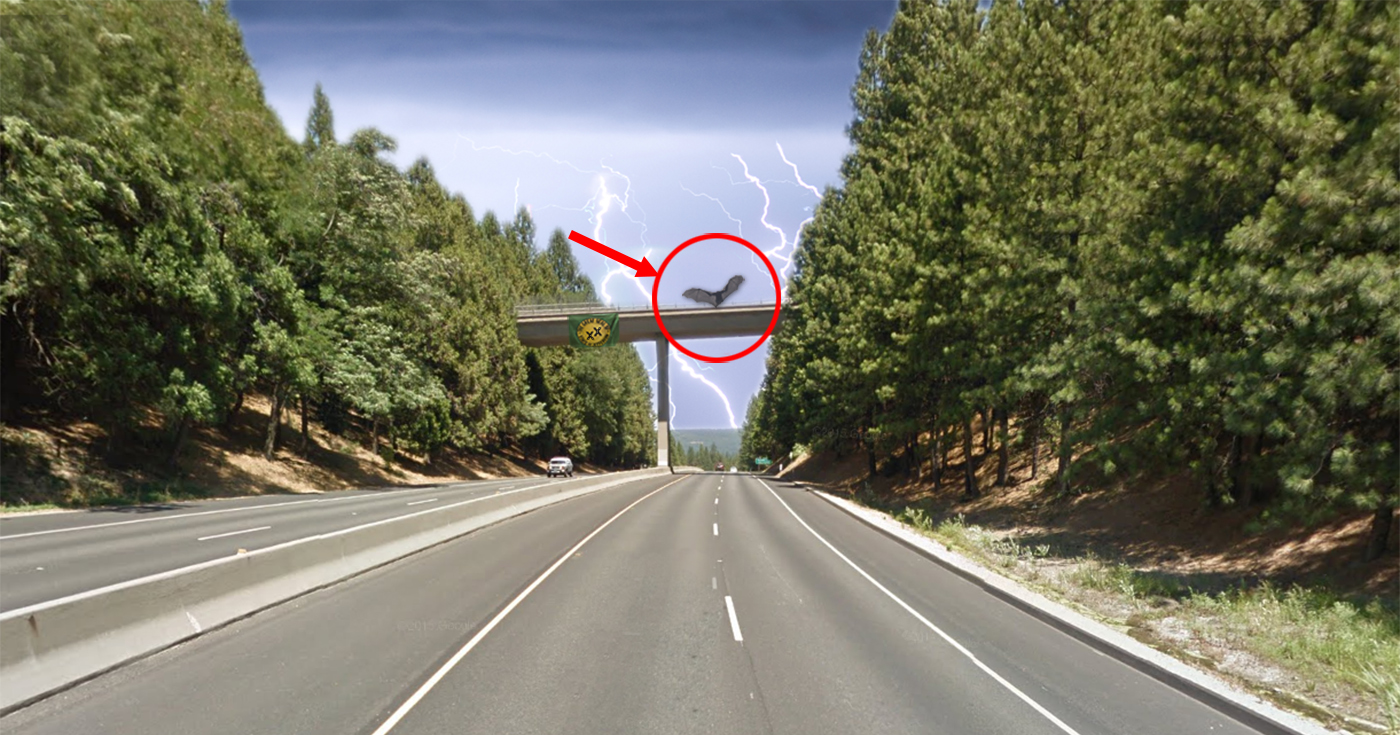 Grass Valley, CA — Area drivers have reported seeing a strange creature attached to the outside of the Banner Lava Cap Road overpass late last week. The beast, which several people described as being around 10 feet in height and possessing a large, bat-like wingspan, resembled a mythic creature called the Mothman, which terrorized Point Pleasant, West Virginia in the 1960s.

The Mothman creature appeared after a 3-hour “Make America Open Again” protest on the typically ordinary and uneventful overpass. The protest, which was organized to raise awareness for the fate of the United States economy, seems to have drawn the foreboding creature to the Nevada County Area.

“I was driving on 49 towards Nevada City,” said Banner Mountain resident and work-from-home software engineer David Cook, “when I looked up and saw this ‘thing’ hanging from the Banner Road overpass. At first, I thought it was a teenager playing a prank. You know how teenagers are. As I got closer, I thought it might have been a homeless person. But then I saw the wings. And then it looked at me as if it knew I was watching it. After I passed, I pulled over on Sacramento Street. It freaked me out, and I called the police.”

Mothman is a humanoid moth-like creature reportedly seen in the Point Pleasant area of West Virginia from November 15, 1966, to December 15, 1967, when the town’s Silver Bridge collapsed during rush hour traffic. Although the Mothman is considered a terrifying, perhaps extraterrestrial creature, many people believe that the creature was warning the people of Point Pleasant of the impending disaster. Engineers who’ve studied the bridge’s collapse say the tragedy has nothing to do with a supernatural creature, but rather due to the poorly constructed single eye-bar construction in the suspension chain.

Some say the mythical Mothman appeared to warn about the dangers of reopening the economy too soon in light of the recent novel coronavirus pandemic.

“I typically don’t believe in any of this stuff,” continued a nervous Mr. Cook, “I mean, anything hocus-pocus is generally a waste of my time. However, this was different. I mean, when you see something like that staring you straight in the eye, you change your opinion on the supernatural quick. I was seriously thinking it was going to drop onto my Subaru as I drove under it.”

According to Brigham Young University Anthropologist Jim Smithson, the Mothman seems to be attracted to crumbling infrastructure.

“We can only speculate here because all I have is this somewhat grainy photograph,” commented Dr. Smithson from his Sierra City Hotel where he is currently investigating an Adolf Hitler sighting, “but if true, I think the Mothman is trying to tell us something about what might happen if these reopen protesters get their way. It’s hard to be sure like I said, but that would be my first guess.”

Several other Highway 49 commuters also noticed the creature, but politely refused our request for an interview citing fear of either a Mothman or State of Jefferson attack. Most said, off the record, that the creature scared, as one Grass Valley woman put it, “the bejesus out of her.”