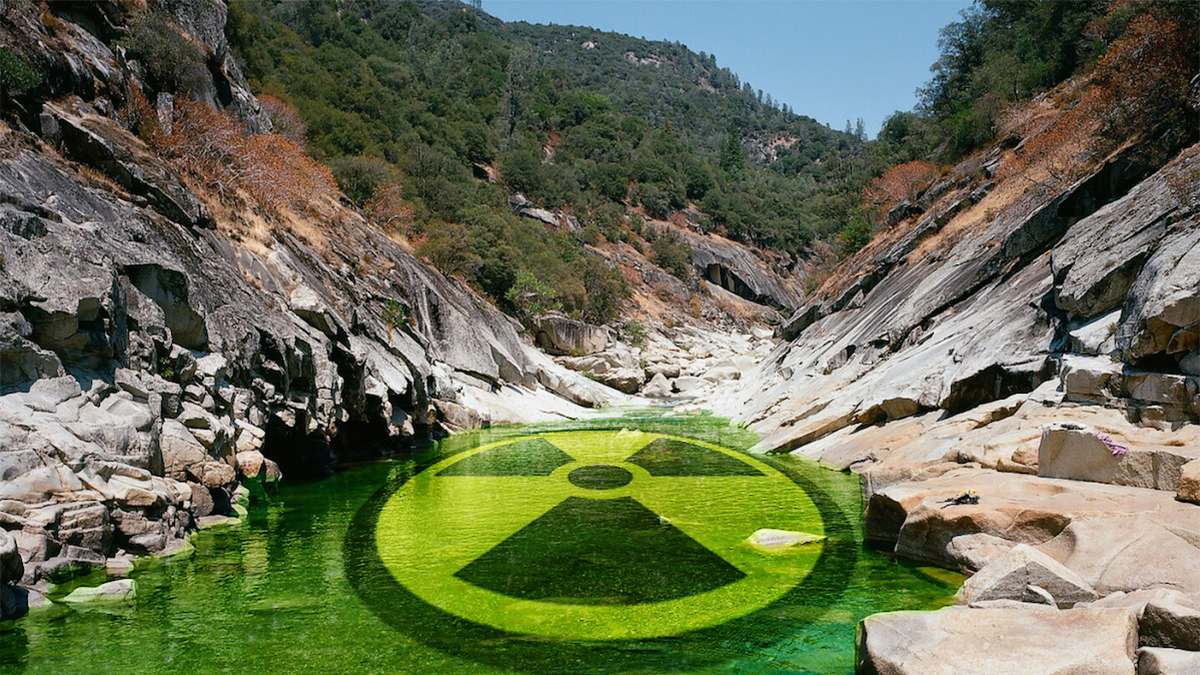 Nevada City, CA — A group of high schoolers working the annual Yuba River cleanup discovered a little more than used hypodermic needles and dirty diapers this past Saturday. During the volunteer-driven trash pick up day sponsored by South Yuba River Citizens League or SYRCL, 16-year-old Nevada Union students Russ Meeks and Daphne Jarrell of Nevada City discovered what county officials believe is abandoned nuclear material. The discovery, which shocked both the clean up and government officials, has been transferred to the Department of Homeland Security (DHS) and the area has been blocked off until further notice.

Meeks and Jarrell were assigned to the Hoyt’s Crossing section of the Yuba River, which is upstream from the Highway 49 bridge. As they made their way down the steep trail towards the river, Jarrell noticed something strange about the water.

“Russ and I were climbing down one of the side trails when I noticed that the water was unusually green at the swimming hole,” said Ms. Jarrell recounting the events of the day. “It was a yucky, slimy green color and it didn’t smell good. Russ ran ahead of me and yelled something about a box with a nuclear symbol on it. That’s when I yelled that we needed to get out of there.”

The pair returned to the 49 Bridge parking lot and informed organizers of their discovery, who then contacted government environmental authorities who arrived later that afternoon to inspect the situation.

“The device appears to be a nuclear device of foreign origin,” said California Department of Environmental Sciences spokesperson Bethany Millbright. “It appears to be Chinese or North Korean in origin, but we need to do some more investigation. The public should not be alarmed because it seems to be a medical device used for x-rays and the like. But we won’t know until we’re done examining it. It appears the green algae bloom is do the heat generated by the device.”

“It’s obvious this is an attack from North Korea or Fukushima elites,” said part-time chemtrail researcher and amateur non-ionizing radiation hobbyist Skyy Wolford. “Don’t listen to the deep state government people. They’re all liars. I wouldn’t even be surprised if the government put that radiation there, and wanted us to believe it was the North Koreans or Fukushima to start a war. People need to wake up and smell the nuclear holocaust.”

According to DHS, the device appears to be an illegally dumped dental radiation device, and officials will be visiting area dental offices next week to investigate further.