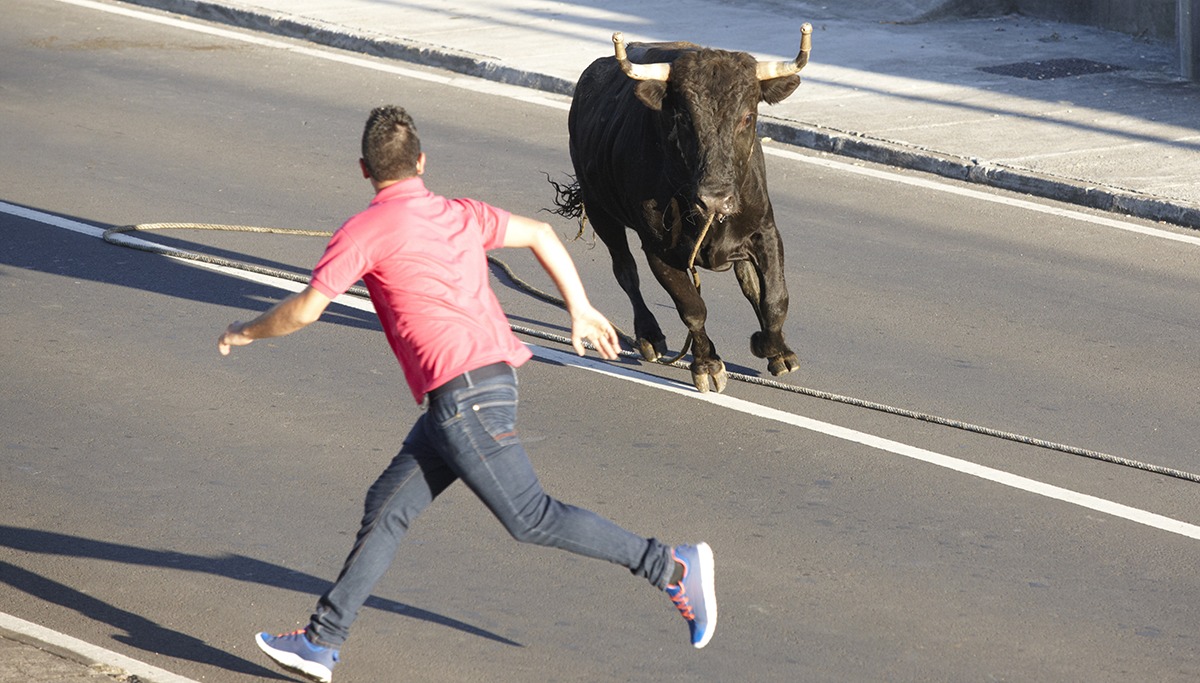 Grass Valley, CA — Cedar Ridge exotic pet owner Pete Johnson is in hot water today after taking one of his two “pet” bulls on a walk-in Downtown Grass Valley. Mr. Johnson, who is no stranger to animal controversies, arrived on Mill Street around 1 pm yesterday with his pet bull “Jim,” and things immediately got out of hand.

“I was downtown shopping when this bull comes running down the street,” said area woman and neighbor of Mr. Johnson, Janet Williams. “It was just running down the street like it owned the town. Everyone was screaming and running for their lives. Jumping over cars. Mayhem, really, which I thought was a bit overboard, you know. Pete strikes again. That asshole will never learn.”

According to the police report, Mr. Johnson parked his trailer in the public parking lot behind the former Owl Restaurant, unloaded the beast, and proceeded to walk him out onto Mill Street as if he was a dog. However, after seeing local fixture Toby “Doob” Carnevale exiting from Yuba Blue, the animal became spooked, where he had just paid for a $.23 marble with a check.

“Yeah, man. I was so happy to get that marble,” said Mr. Carnevale in a Gish Gallop telephone interview. “And I’m outside Yuba Blue looking down at my marble, and then I look and sees this big cow with horns and shit, man. So I screamed and dropped my marble into the sewer grate and ran back inside. Bummer.”

What happened next is up for debate, as witnesses reported seeing the bull doing different things. One man, who wished to remain anonymous, said the bull just wandered out in front of the old Wells Fargo Building and just sat there at Bank and Mill Streets’ intersections. Another witness said the bull charged her 2008 Buick La Sabre as she drove by.

“I was on my way to the bank when I heard this thud on my Buick,” said Penn Valley retiree and Roundabout expert Mary Shilling. “I honestly thought someone had driven into me, but that’s when I saw a bull outside my window. It was just staring at me with its nose up against the glass and making a mess of it, I might add. So I honked my horn and told it to get the hell out of my way. And it did. These flatlanders don’t know how to handle livestock.”

As for Pete Johnson,  he is relatively apologetic about the incident but doesn’t seem to grasp the gravity of what happened.

“Well, I don’t know why people get so uptight about my animals,” said a somewhat confused Mr. Johnson. “I mean, ever since Jennifer [Pete’s wife Jennifer] and I got into trouble over our pet cougar eating all the neighborhood cats, I’ve been really careful. And Jim needed to get out for a walk. I was able to get him back on his rope after a few seconds. There was no need for everyone to freak out and start running away and stuff. Apparently, the police don’t like pets.”

According to court records, Mr. Johnson was charged with public disorderly conduct and endangering people’s lives. He also received a $1500 fine from animal control.