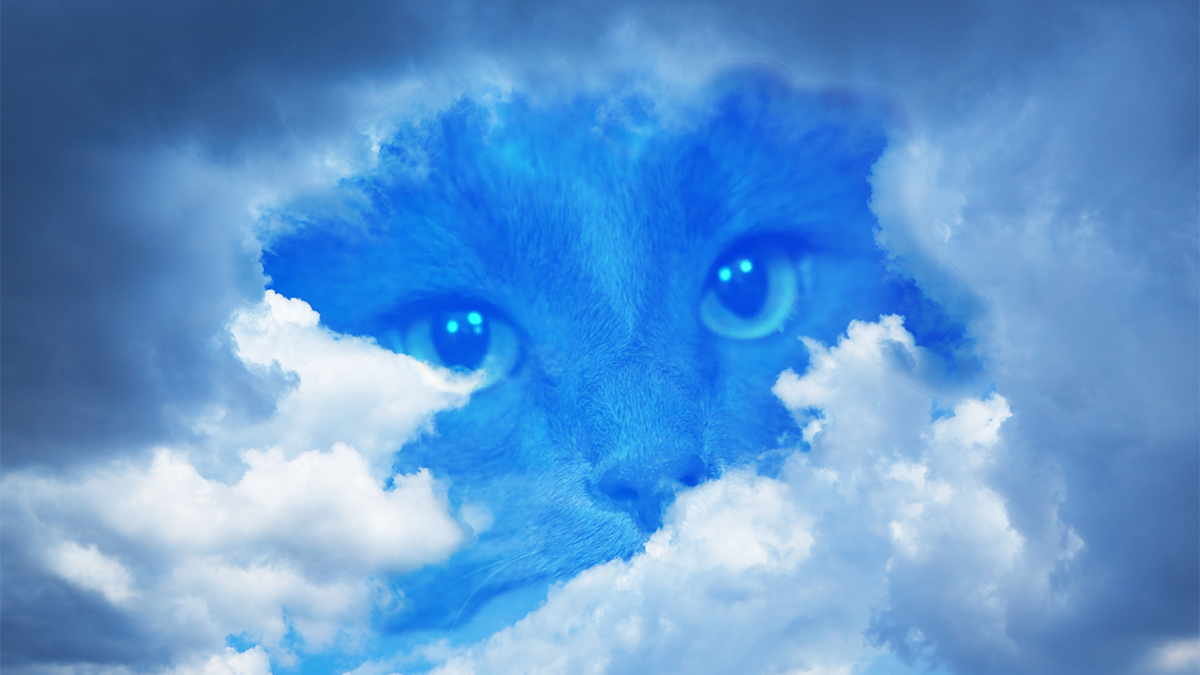 Nevada City, CA — Several readers have contacted the Beacon with reports of a mysterious beam of light emanating from the sky above Nevada City, CA. According to more than one caller, the mysterious light beam seemed to originate on Coyote Street in north Nevada City. It then climbed into the upper atmosphere, where it appeared to transform into a large cat. No injuries were reported.

Area local fixture Toby “Doob” Carnevale of Nevada City happened to be in the area when he spotted the anomaly and recorded it.

“We had just had all this rain over the weekend,” said Mr. Carnevale. “And it was dark around 4:45 or so. So anyhow, I was on my way to cash a check at SPD [market] when I saw this flash of light. So I pulled over and started recording it. It was the damnedest thing I’ve ever seen. And then it turned into a cat. I shit you not. I didn’t think it could be dangerous or anything like that.”

“I don’t know what to make of it,” said Nevada City resident Stacy Grant who was on her way back to her Cottage Street residence with a double-order of Panda Express. “My daughter saw it first and said ‘whoa,’ that’s when we all heard the buzzing, and we pulled over. It was so cloudy, so we thought it was lightning or something like that. That’s when Lisa [Ms. Grant’s daughter] said she saw the Siamese Cat. And sure enough, so did I.”

Project Blue Beam is a top-secret operation of the National Aeronautics and Space Administration (NASA) of the United States of America. Its supporters maintain that NASA is attempting to implement a New Age religion with the Antichrist at its head and start a New World Order via a technologically-simulated Second Coming.

There have been numerous sightings of similar light beams over the Earth in the past few days. One in Topeka, Kansas, and two such beams in Kent, Washington. However, neither location reported seeing what is now being called the “Nevada City Light Cat.'” According to area paranormal researcher Skyy Wolford, these events are not anomalies but rather practice runs for an impending invasion, albeit a friendly one, according to Mr. Wolford.

“Look, this has been in the works for centuries now,” said a mood-elevated Mr. Wolford via telephone from an undisclosed location in North San Juan, CA. “It’s all in the ancient Sumerian texts from thousands of years ago. They describe inter-dimensional extraterrestrial beings who travel via light. So this is some kind of test run for a large event shortly.”

When asked to explain the cat at the end of the phenomena, Mr. Wolford seemed confused.

“I don’t know anything about any cat. I suppose you’ll see whatever you want to see,” continued Mr. Wolford. “You know, the mind creates all kinds of things it wants you to believe. So I guess there’s a cat there, but I do not think it’s related to the Sumerian activity. Who knows? Maybe they like cats.”

According to the National Weather Service, there has been no recorded electrical activity in the area. However, officials and technicians from nearby Beale Air Force Base have taken various measurements at the Coyote Street location. As a result, the Nevada City Police Department has told the public not to be alarmed.