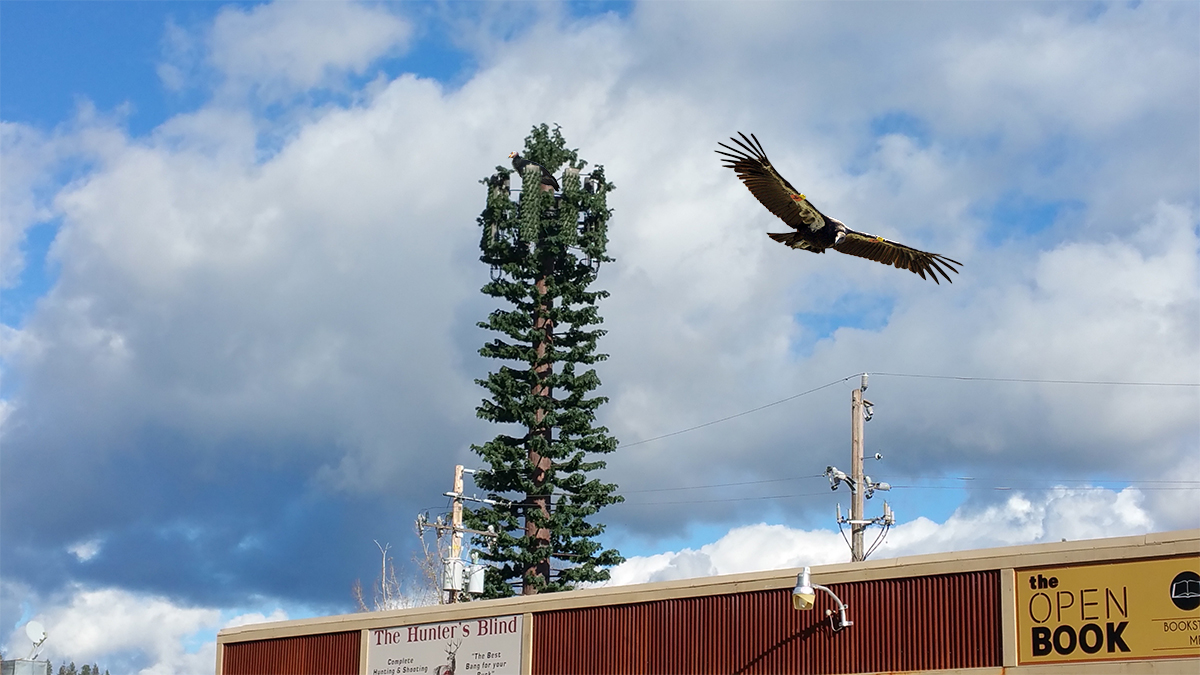 Grass Valley, CA — Wildlife biologists from across the country have convened in Grass Valley this past week to observe what many are calling a miracle. Earlier this week, several people reported what seemed to be a pair of birds in the Glenbrook Basin area building what appeared to be a large nest. County wildlife officials were called to the scene and identified what they said was a rare California Condor settling down for the winter in a tree-cloaked cell phone tower.

“Well this isn’t something you see every day,” said University of Santa Cruz Wildlife Biologist Davis Jones who is an expert on the California Condors. “We don’t typically see them this far north, but I’m happy to see them thriving again.”

Condor numbers dramatically declined in the 20th century due to poaching, lead poisoning, and habitat destruction. A conservation plan was put in place by the United States government that led to the capture of all the remaining wild condors which was completed in 1987, with a total population of 27 individuals. President Donald Trump in a recent executive order has allowed the once rare bird to be hunted again for its meat, something it’s never been known for.

“What most people don’t know,” continued Mr. Jones, “is in recent years, the Condor has taken to cell phone towers. Everywhere these spring up, there seems to be one nesting. We’re not sure what’s going on, but it seems to have something to do with the radio waves. I mean, these towers have helped bring back the Condor from extinction.”

The discovery of a Condor nest has brought people not only from Nevada County to view the site, but many “nature” tourists from around the country.

“Well, would you look at that,” said Sherry Yokoyama who traveled from Santa Fe, New Mexico to see the largest North American land bird. “I’m so glad to see them back again. I know they’re not the prettiest animal out there, but that’s no reason to disregard it. I mean, you should see my ex-husband. He was as ugly as sin, but I wouldn’t want anything bad to happen to him. Well, maybe something. You know what I mean.”

Despite the unusual and successful partnership between bird and tower, area anti-electromagnetic radiation (EMR) activist Saihra Ramun wants the tower taken down.

“It would be better if they didn’t live at all than if they must live with those horrible emissions,” explained Ms. Ramun has she spoke via her trademark megaphone to us in front of Nevada City’s New York Hotel. “I think if they’re stupid enough to live near those things, much less in them, then they are probably better off dead as a viable species. I know some people don’t want to hear this, but the tower needs to come down. I haven’t slept through the night since it went up last year.”

According to Ms. Ramun, who has been an outspoken critic of what she calls “the lack of public consent to construct radio wave towers which are killing us,” maintains that the Condors are “false flag actors” placed by Verizon Wireless and others to confuse the public about the dangers of non-ionizing radiation.

“Look, do I have to spell this out for you every time?” Questioned a somewhat mood-elevated Ms. Ramun when answering questions about her so-called theories. “This is a play by Big Telecom to make money off making us sick. It’s no different from what Big Pharma does. And they’re doing this without our consent. You know, putting all these towers up everywhere. Wake up, already OK? Condors can’t live here. They’re the bird equivalent of the false flag actors we’ve seen in Orlando, San Bernardino and the Dallas shootings. I’ve got the documents. Do some research.”