“Scissors are like socks, I’ve learned,” said Ms. Woods during a telephone interview with Gish Gallop. “One minute they’re there, and the next minute they’ve been sucked into an alternative universe never to return. So I’ll keep this old pair just in case.”

Americans like to keep things. And every home, big and small, across the country have what’s popularly referred to as “the junk drawer.” These drawers contain everything a family needs, yet can’t find a sensible storage place. Often, these drawers will neither open, nor close in an orderly manner.

“Nancy just can’t get rid of anything,” said husband Jim Woods. “As soon as she’s not looking, I’m gonna throw these damn scissors away. And the whole drawer for that matter as soon as I can get it open.” 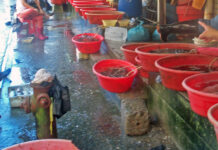