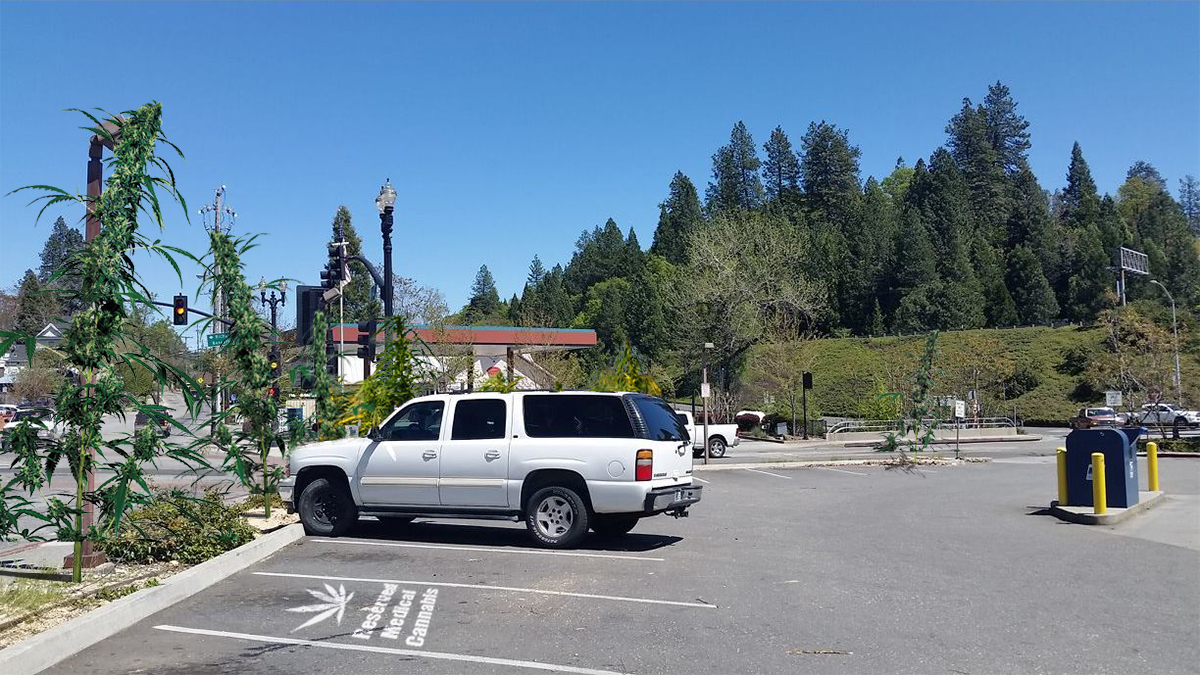 Grass Valley, CA — Today, the United States Post Office removed all the trees in front of its Grass Valley, CA location. No official reason was given for their removal. However, by Saturday morning, a North San Juan contractor had replaced the trees with Nevada County’s #1 cash crop: Cannabis plants.

“Well, I think they look great,” said ‘pot contractor’ Thomas Kevlin, who just planted the 4th plant on the Bennett Street side of the Post Office. “We’re going to plant another six next weekend.”

According to Mr. Kevlin, he was hired eight months ago when the Post Office informed him that they needed to replace the aging trees, which had buckled the sidewalk for several years and become a pedestrian hazard. Postmaster General Megan Brennan, an Obama-era holdover, wanted to make the Grass Valley post office more “regionally appropriate” and ordered that the trees be replaced with the county’s official plant.

“So they contacted me,” continued Mr. Kevlin. “I was like, ‘sure. I could do it.’ I told them they’d need established plants, which I had. I think it’s a great idea. Some asshole also bid the contract for Scotch Broom, but I beat him out.”

Although many locals are concerned about the marijuana plants, conservative activist Misty Smith of Roseville, CA, and founder of Don’t Nevada County Roseville, an anti-liberal/pro-growth group whose goal is to keep Roseville suburban, full of shopping centers and a white demographic, is happy about it.

“This is great news for Roseville,” said Ms. Smith, who had set up a petition table outside of Roseville’s posh Fountains shopping center. “I mean, this would never fly here. I’m glad all those hippies are keeping their druggie nonsense in Nevada County. We don’t need it here.”

According to a Post Office insider, the Postmaster is trying to “make a statement” to infuriate United States Attorney General Jeff Sessions, with whom Ms. Brennan and Sessions recently had a brief spat. However, it’s unclear what the ramifications of such an action will be, if anything.