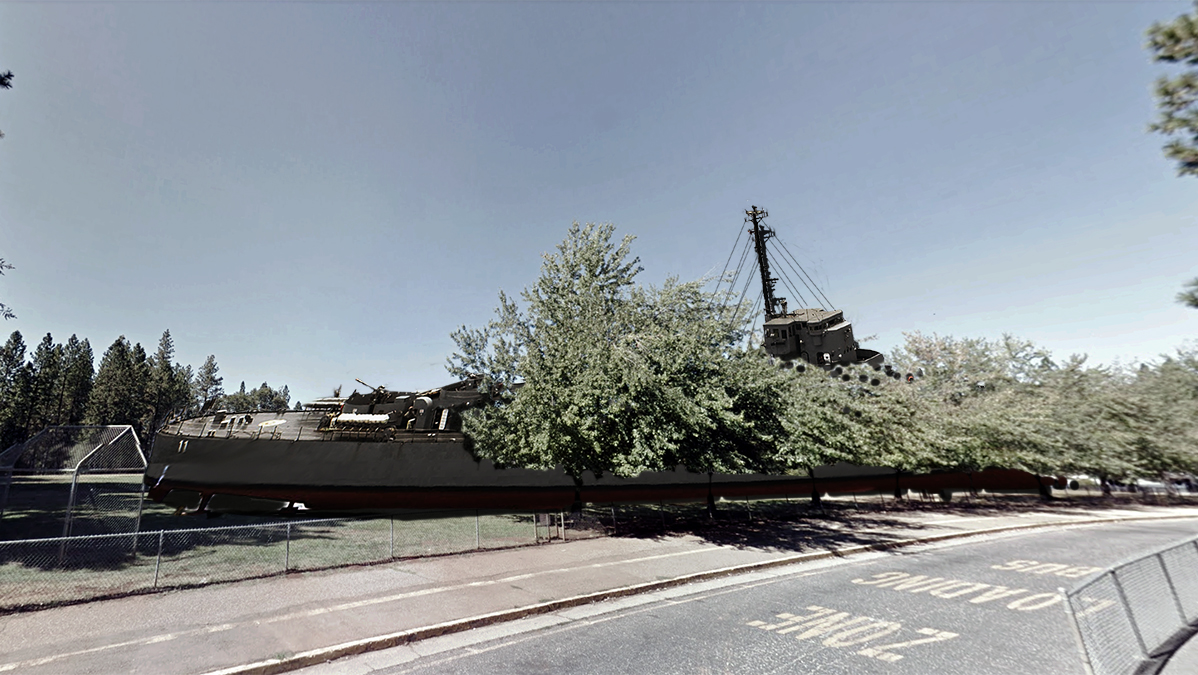 Grass Valley, CA — It was like any of the other mornings for Grass Valley’s Ken Cornys. He was on strict doctor’s orders to get some daily exercise after a heart scare two years ago. So every day, the 64-year-old retired PG&E foreman walked his two Pekingese dogs, Sam and Susy, in a four-mile loop, which occasionally includes a short-cut through the parking lot of an area school.

“Well, the doctor told me to walk 4 miles every day,” said Mr. Cornys speaking from his living room at Rhode Island Street home, “but sometimes I want to get back to watch the Raiders, so I take a short-cut through the Lyman Gilmore [Middle School] field. Hey, don’t tell the wife, would you? That’s the last thing I need.”

As Mr. Cornys set out for his early Sunday morning walk, trying to hurry back to watch his beloved Raiders game at 9:30 am, he took his secret detour through the deserted parking lot at Lyman Gilmore Middle School. It was then when he saw something he knew no one would believe.

“So I came up the driveway from Scotten [Scotten Elementary School which sits next to Lyman Gilmore Middle School], and I was going to do my fast route across the field. What I saw as I came up to the top of the hill here stopped me in my tracks.”

According to Mr. Cornys, he saw what he has no identified as a World War II Cannon-class destroyer “parked” in the Lyman Gilmore field.

“Well, I mean, it was a huge battleship or something kinda tilted on its side. And it was an old one,” continued Mr. Cornys. “From a distance, I thought it was smoke from a fire or something because there was smoke, you know? But as I got closer, this thing was massive. It was the length of a football field, and I’d say 100 feet high at the mast. It was just sitting there as it had always been there. My Suzy began to bark at it. Thank god I had my iPhone on me and was able to get a couple of pictures.”

Although Ken Cornys didn’t realize what he was looking at, other than the apparent antique warship, one area man knew precisely what it was.

“It’s the USS Eldridge. I mean, it’s even got the 54 on the side for Christ’s sake,” referring to the pictures published in the Union. “They’ve movies about it; there have been countless documentaries about it. It’s been referred to as the Philadelphia Experiment, and it’s not the first time Eldridge has shown up in random locations. Why here? Well, my bets on are the work that Lyman Gilmore was doing last century and, of course, all the Litton microwave experiments after the war. That’s a no-brainer.”

The story first appeared in 1955, in letters of unknown origin sent to a writer and astronomer, Morris K. Jessup, but has since become synonymous with the phrase “government cover-up.” Lyman Gilmore of Grass Valley, California, was rumored to have several technologies that contributed to him being the first in flight, beating the Wright Brothers by almost two years. And Charles Litton Sr., the father of the modern microwave oven, was said to have conducted many government “radiation experiments” in the 1950s from his Grass Valley weapons laboratory.

“I mean it makes sense when you think about it,” continued a mood-elevated Mr. Wolford, “do some research, and you’ll see that I’m right about this. Look, man, the Eldridge is probably stuck in some space-time vortex. I wouldn’t be surprised if it showed up here again.”

As for Mr. Cornys, upon realizing what he was seeing, Mr. Cornys snapped three pictures of the destroyer. But it was when he approached the massive naval vessel that the situation became even stranger.

“There was no one around, and I started yelling at the ship to see if anyone was on-board. When no one answered, I started to walk up to it. After I got, I don’t know about 30 feet from it. I could see that it was steaming. I could also feel some heat coming off it. I decided that I better get away from it and turn and dragged the dogs towards the parking lot. As I got out to the driveway, I felt a burst of heat, and when I turned around, it wasn’t there. It was gone.”

The only evidence that any vessel was there was a modest indentation of the lawn, and some dried grass [Mr. Cornys insists the lawn was scorched]. And the pictures he took, which have been the subject of ridicule and scorn from locals and government officials.

“I know what I saw, and I have these pictures, you see. My wife thinks I’m just making up stories to get out of my walks. Figures.”