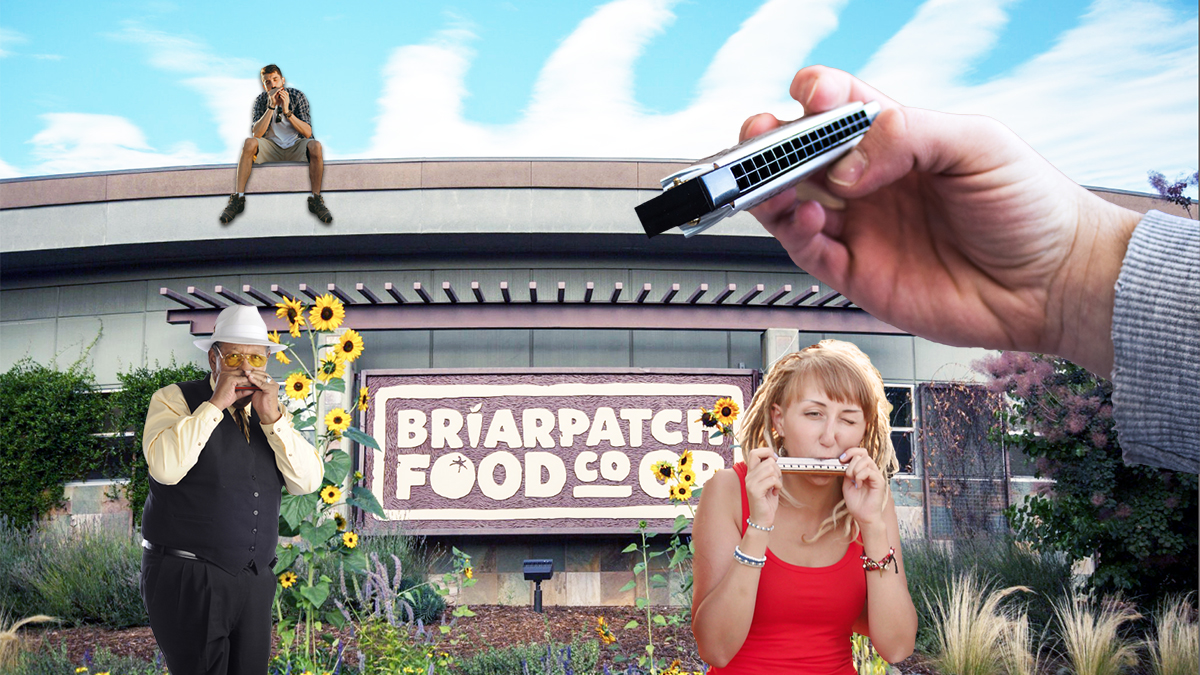 Grass Valley, CA — In what some are calling a marketing mistake, and yet some others calling it “the Nevada County thing to do,” the BriarPatch Coop announced today that  its daily Harmonica Shopping Spree contest has been an overwhelming, albeit noisy, success.

Staring last week, the BriarPatch started giving away a $25 shopping spree to the loudest harmonica player in the grocery store. At first the response was limited to just a few, however after word spread on several Nevada County Facebook groups, harmonica players from around the area started pouring into demonstrate their “mouth harp” prowess.

“At first I thought it was a joke or something,” said long-time Nevada City resident Toby “Doob” Carnevale who said he recently picked up the harmonica. “But I thought I’d give it a shot. I can’t play so good, but I sure can be loud.”

After 4 consecutive days of playing loudly in the BriarPatch, including the third day when he was escorted out of the store, Mr. Carnevale won a $25 shopping spree. He was also told never to come back.

From All Over California

After about 2 weeks, more players started showing up from all over California, which caused numerous problems in the already congested parking lot, not to mention the volume levels in the store.

“I ran in to get some yeast and popcorn for the kids, and it was almost unbearable,” said Nevada City resident Stacy Grant recalling her ordeal. “There must have been 50 people playing the harmonica. At least half of them were trying to play Blowin’ in the Wind. Poorly, I might add. One guy was attempting Swannee. That was actually pretty good. But there was this one woman with an accordion playing Lady of Spain who apparently didn’t read the rules or something. I dunno.”

According to the BriarPatch management, the shopping spree contest will last at least two more week, although they hare considering extending for another month due to its popularity.