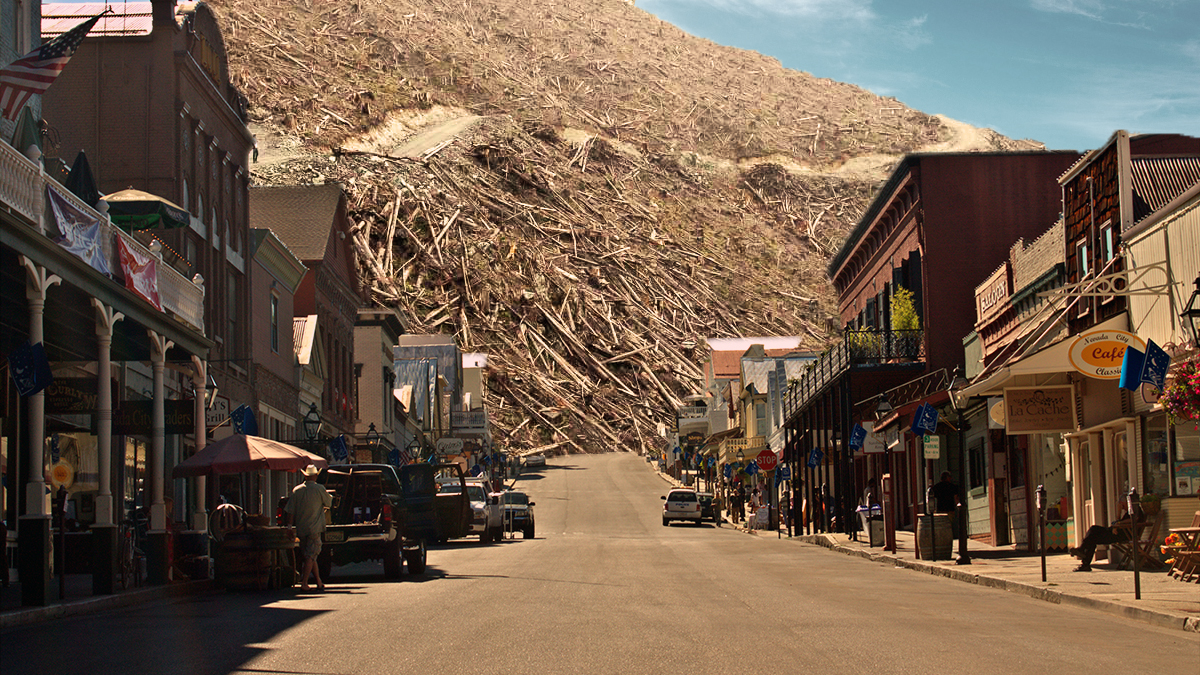 Nevada City, CA — Late last week, the Nevada County Board of Supervisors voted unanimously to cut down every tree and remove all shrubbery in a tranquil session. The ordinance, called “The Tree Removal and Fire Safety Act,” will require removing all vegetation within 5 miles of every city limit.

Those outside of the city limits in unincorporated areas will be required to remove at least 3 acres of trees around their dwellings. If residents and property owners live on less than 3 acres, they have to remove all trees.

As many as 3 million Californians live in what is called the wildland-urban interface, or WUI. The WUI is a transition zone between unoccupied land and human development. Homeowners in these areas have received insurance company notices stating that they will no longer be covered due to increased fire danger. Not only will they not be covered, but most insurance companies are pulling out altogether from designated zip codes.

Many hope this new and comprehensive ordinance, supported by both California 1st district Assemblyman Brian Dahle (R) and Congressman Doug LaMalfa (R), will be a solution that drives insurance providers back into the area.

“I’ve maintained that the real solution to our insurance crisis is fuel removal,” said Dahle in a press release regarding the new ordinance. “By cutting down every living thing, we can reduce the fire risk to zero. And that’s what insurance companies want. Zero everything.”

Hungry Goats to the Rescue?

One of the special provisions in the ordinances allows property owners to choose the method of tree removal. Although not explicitly mentioned by name, government observers reckon that ambiguity allows for goats to be used to fall trees.

“It makes complete sense,” said furious community activist Saihra Ramun speaking out in front of Nevada City’s New York Hotel earlier this week. “We can sic our goats on all those pines and cedars, and within no time, they’ll have them all down.”

“I’m not sure I should even dignify that proposal with a response, but someone needs to mention it,” said Dale ‘Con’ Hempt, owner of Con, Diggins, and Holmes. “I mean, do I have to explain that goats can’t chew through a 150-year-old pine tree. And even if they could, where would it fall? Probably on the other goats and nearby homes.”

As for more practical parts of the ordinance, if you can call it that, removal of the up to 45.3 billion board feet of timber around Nevada County will cost upwards of $892 billion, according to the County’s accounting office. The money the County doesn’t have. However, supporters of the new law say that much of the wood could be resold to build housing for the homeless.

“It’s effortless if you ask me,” said area contractor David D. Davidson, who is the owner and operator of David D. Davidson Dirtmover Enterprises, who stands to benefit heavily from the County’s new ordinance. “You’d think the liberals would be all behind this. You know, building homeless shelters and crap like that. But many are all worried about the trees. Stupid if you ask me. It’s like worrying about lettuce.”

Recently, several environmental organizations have celebrated the recent wildfires that have taken both life and property but cheered about insurance companies’ mass exodus. Brad F. Shyster, founder, and director of the radical John Muir Nature Institute, says that the ordinance results from big business tampering with our forests.

“Look, I’m not going to lie,” said Mr. Shyster. “What we need are more frequent and hotter fires. Hot enough to burn right down to the bedrock. Also, it’s about time we kick people out of the interface [the WUI], and if it takes insurance companies to make that happen, that’s something we support. These areas need more trees, not people and goats.”

County officials expect a protracted legal fight, which they say will only put more citizens in danger from a catastrophic fire.