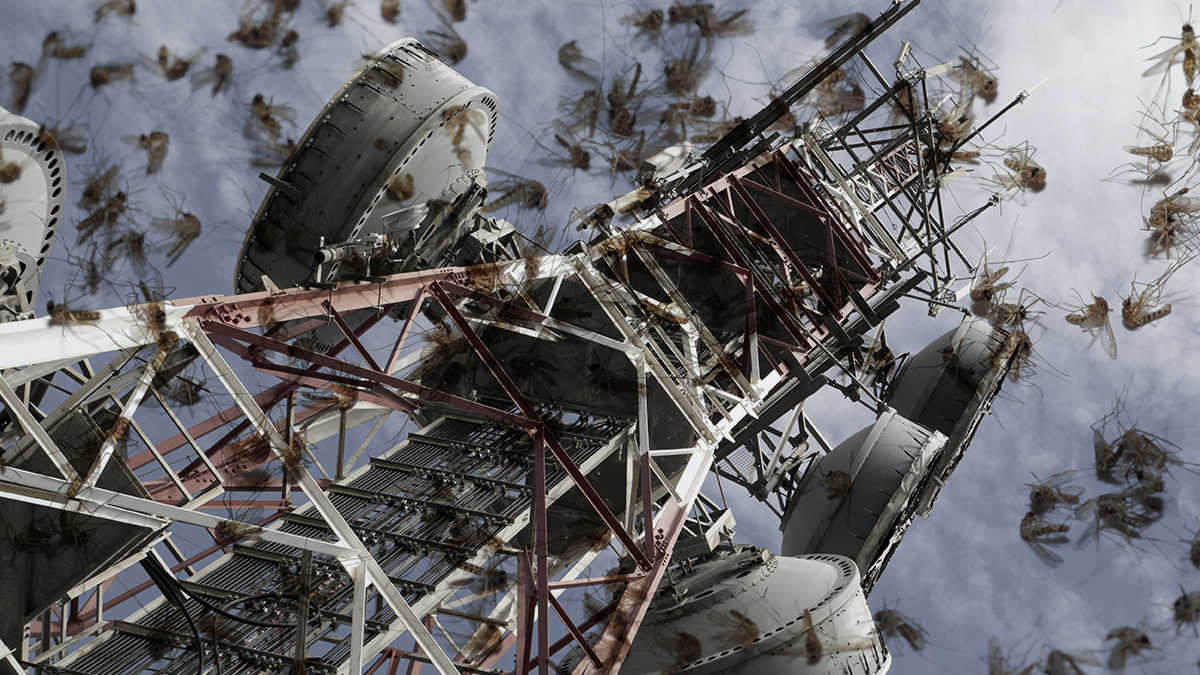 “The data doesn’t lie,” said lead researcher Robert Colvin speaking about the findings. “Everyone was surprised. Because even at a direct-line distance of 40 meters from a cell antenna, the energy produced is frankly negligible. Like in the micro watts. But this data shows large die-offs of both Zika and West Nile infect insects. It’s quite incredible, although there need to be some follow-up studies.”

The 543-page report, which included researchers from both Rundex and the CDC, recommended both further study and also implied that the government should be working with large cell phone providers like Verizon to expand their cell phone tower footprint in cities and towns that have “significant mosquito disease vectors.” For some, including a handful local unemployed anti-EMR [ElectroMagnetic Radiation] activists, this is an unacceptable trade-off between reducing airborne viruses, and getting brain cancer from cell phone towers.

“Look, there are many studies that prove cell phone towers cause cancer and a variety of other illnesses,” said Damon Gailansky speaking about the dangers of electromagnetic radiation during a cell phone interview. “I don’t care about what these egghead physicists and all their inverse square law math stuff. We didn’t have to do the math back in 1875 because there were no cell towers. Sure people died more, but that’s the price we pay for safety. Same is true for Zika. I’m willing to let more people die if it means no more cell towers in Nevada City. And I’m prepared to file an ADA lawsuit to stop this.”

Experts in the field of epidemiology and research theory, have a different perspective on what is being called an “under-educated and reactionary response” to this latest study.

“Clearly, the anti-cell phone tower crowd does not understand the concept of dose-response,” said University of Chicago Professor James Badwater in a Gish Gallop telephone interview. “There is indeed a concern that if one stands directly in front of a cell phone tower how he or she can sustain injury. There have been reports of cell workers getting sunburns. This is not new. What these protesters don’t seem to understand, is that the dose at even a few meters away is lower than their neighbor’s WiFi routers, over even the natural radiation is given off when they sleep next to someone. Anyhow, it’s the dose that matters, not the actual thing. Drinking water in high enough doses will kill you. I suppose they’ll go off the deep end now and say something like ‘If it’s strong enough to kill mosquitoes, imagine what it’s doing to our brains.’ This is why we really need disciplined experts who’ve studied these things.”

As for Mr. Colvin, he hopes they’ve found the magic bullet in reducing disease from the Zika, West Nile and other mosquito born diseases.

“Imagine if we could control or eradicate Malaria simply by putting up more cell towers,” continued Mr. Colvin. “We could use fewer pesticides and improve cell data throughput.”