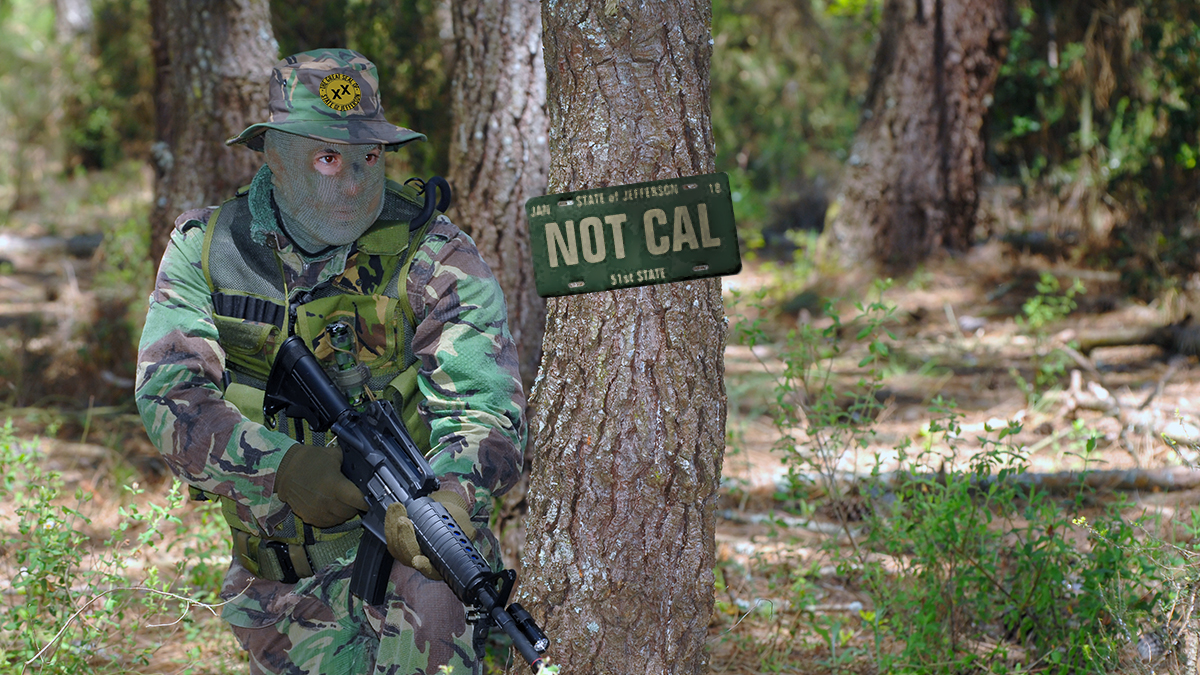 Rough and Ready, CA – The State of Jefferson today declared war upon the Great Republic of Rough and Ready through a press release to The Beacon, giving its reason as “no independent country shall be allowed to exist within the borders of the State of Jefferson’s territory.” The Great Republic of Rough and Ready, a micro-town located a few miles west of Grass Valley, seceded from the United States in 1850. Even though the town rescinded its independence three months later, it was not formally admitted into the Union until 1948.

When questioned about the declaration of war, most townspeople of Rough and Ready reacted in a justifiably surprised manner.

“That’s just nuts,” said Bill “Raccoon” Miller, an old-timer from Rough and Ready. “We haven’t been a real independent country in over 150 years. Maybe they [State of Jefferson] are jealous because our town had the idea first.”

“What’s anyone got against our little town? Sure we have our Secession Days weekend where we whoop it up and get a little rowdy, but other than that, we’re pretty quiet,” said Darlene Roberts, a long-time resident of Rough and Ready.

Her neighbor, Alan Brophy, was more outspoken. “What the fuck?” he asked, “Sure, I’ve seen some of those Jefferson signs around. I guess I’d better buy some ammo in case of violence.”

Many Rough and Readyans agree with Alan Brophy that armed conflict might be imminent. Several townspeople jumped in their pickups and rushed to Kmart and Big 5 Sporting Goods to stock up on guns and ammunition.

“This whole idea is ridiculous,” said Boswell Pulliam, a local historian. “On its face, it seems like a contentious hot head representing the state of Jefferson hasn’t read his history and doesn’t know that Rough and Ready is not an independent country any longer. Or maybe it’s just a practical joke.”

A different view came from Sally Fisher-Dixon, a graphic designer from Rough and Ready. “I think we should declare war on the state of Jefferson,” she said when hearing the news. “I mean, seriously!  Have you seen their signs? They’re an eyesore. I mean, the design is so crappy, my five-year-old could do better. We should be the ones declaring war and tell them to take down their butt-ugly signs.”

In the meantime, the citizens of Rough and Ready are preparing for conflict.

Amanda Hodge, a community leader, was quoted as saying, “We don’t know if these Jefferson folks are coming to invade us or if they are going to troll us online. In any case, the citizens of Rough and Ready are ‘rough and ready’ whether it be on the streets of our town or Twitter!”

(DISCLAIMER:  Despite the initials in his name, Xander X. Xanthangum is neither associated with nor endorses the state of Jefferson XX movement, preferring to stay well out of the line of fire.)