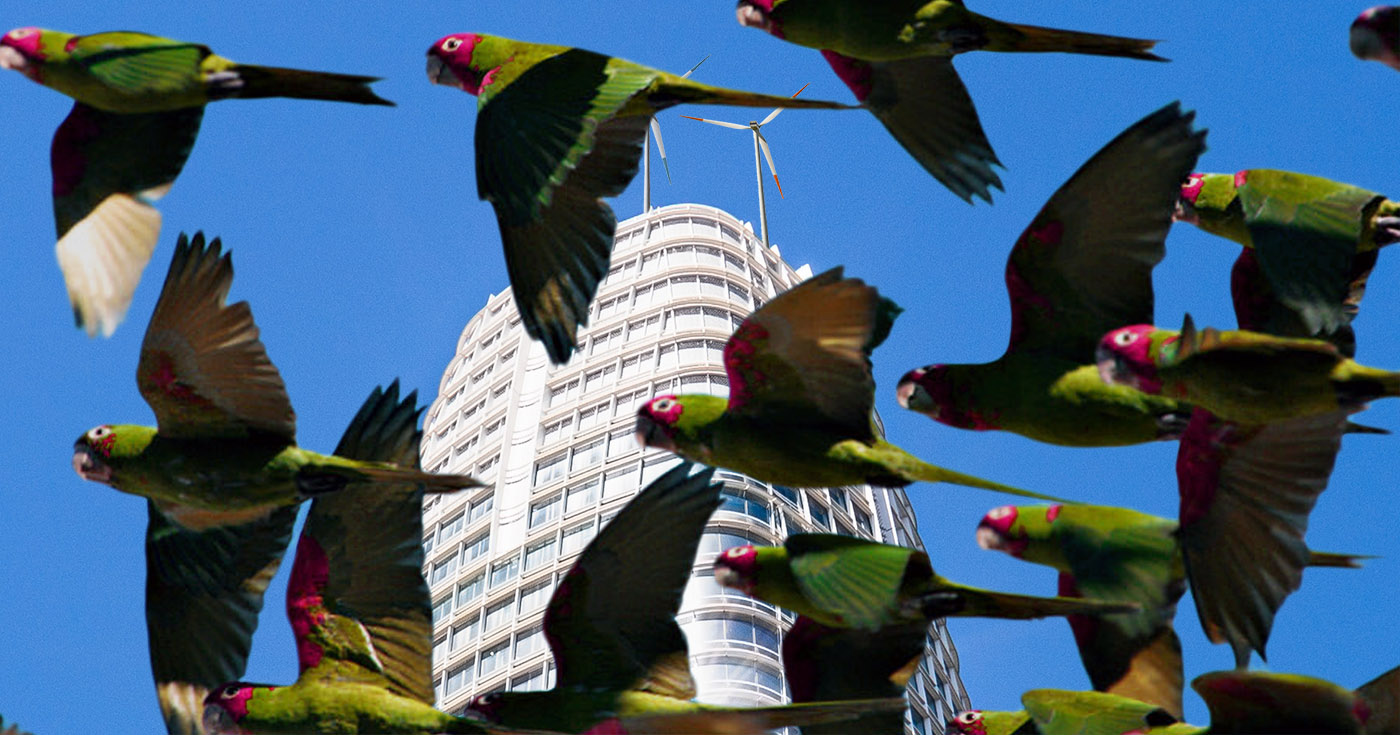 San Francisco, CA — The city by the bay had lost one of its most iconic creatures this past week when the last of the 200+ Telegraph Hill Parrots were sacrificed to an alternative energy project sponsored by Salesforce.com.

Over the past week since the Salesforce Tower “Windmills to the Future” project was launched, dozens of parrots per day have died after colliding with the 1.2Gigawatt power production facility located on its headquarters roof.

“It’s tragic,” said Darrel Praline, founder of Parrots Unlimited, an advocacy group for the famous Telegraph Birds. “We reached out to Salesforce to complain, but they didn’t believe us. Even when we brought in the dead parrots, all they said was ‘o no he’s not dead, he’s, he’s restin’! Remarkable bird, the Norwegian Blue. Beautiful plumage!'”

According to Mr. Praline, the parrots were not Norwegian Blues but rather the Red-masked parakeet variety. A fact that further irritated him.

“‘Look, the plumage don’t enter into it. It’s stone dead,’ I told them. And they just kept saying they were resting. Finally, when I pointed out, quite literally with my finger, that they were not sleeping, they dismissed me again and referred me to the public relations department.”

According to Praline, when reached for comment, the Salesforce community outreach department grew argumentative.

Mr. Praline knew the parrots’ lives were in great jeopardy, and not only that, his livelihood as the city’s premiere “parrot guide” was in trouble.

“I do love the birds, but there’s also an enlightened self-interest angle to this, which also benefits the birds. Like Ducks Unlimited. If they go, so do I. I understand the point of renewable energy, but not for the sake of my parrots. Now, it’s all lost.”

However, all might be lost for Mr. Praline, but according to San Francisco State ornithologist Kathy Finch, over the past 30 years, the wild parrots have spread as far south as San Bruno.

“As tragic as the Salesforce Tower thing is, there are dozens of mating pairs which have spread as far south as Brisbane and San Bruno. This presents another problem, of course. That being the jet engines of SFO. But we’re monitoring the situation carefully, and the airport has several experimental bird dispersal systems currently in play, which Salesforce interestingly donated.”

As for Mr. Praline, he’s not sure what his next move is.

“Well, I’ve lost both my parrots and my business. So I plan to stuff the dead ones and nail them to the perches in the cages. The Coit Tower tourists will buy them for a pretty penny, that I can tell you.”