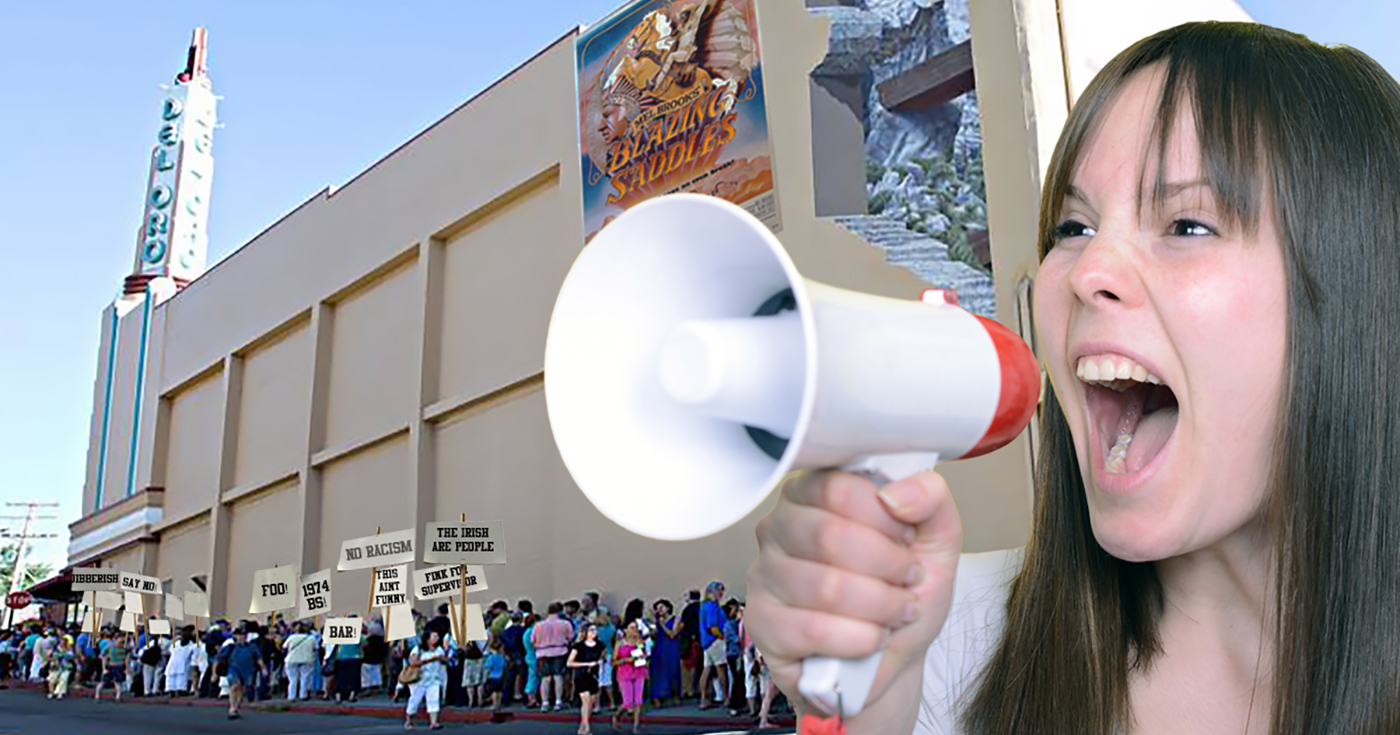 Grass Valley, CA — Protests broke out late this week as a group of activists marched in front of Grass Valley’s Del Oro Theater after the establishment announced plans to show a special weekend matinee of Mel Brooks 1974 comedy film Blazing Saddles. The protesters, who object to the use of what they see as racist themes in the iconic film, say that the movie isn’t funny, and promotes unrealistic portrayals of Irish people around the world.

“This is completely inappropriate to make fun of the Irish,” shouted Nevada City community and chemtrail activist Sairhra Ramun out in front of the Del Oro Theater on Mill Street in Grass Valley. “It is simply not funny to make fun of people based on their heritage, skin color, or their faith. This has no place in Nevada County. I have spoken with many of my Irish friends, and they do not find this funny in the least.”

Blazing Saddles is a 1974 satirical Western comedy film directed by Mel Brooks. Starring Cleavon Little and Gene Wilder, the film was written by Mr. Brooks, Andrew Bergman, Richard Pryor, Norman Steinberg, and Al Uger. The film satirizes the racism obscured by myth-making Hollywood accounts of the American West, with the hero being a black sheriff in an all-white town. The movie is full of deliberate, and often ridiculous film anachronisms. Despite the satirical nature of the film, it has drawn fire from humorless know-nothings who insist that the film is censored and removed from America’s “comedy canon.”

“I fail to see what’s funny about it,” said local Green Party member and former candidate Derrick Packard who also co-administers the popular Facebook group Nevada County Peeps. “Satire is supposed to be funny, and there’s nothing funny about picking on the Irish. Ergo, it’s not satire. It’s just ugly art that plays to our most base sense of humanity. It should never be shown again. Anywhere. You know, as Howard Zinn wrote [editors note: the conversation went on for another 20 minutes after he uttered ‘Howard Zinn,’ so we cut it off here.]”

Most critics and people with an IQ above 97 believe that a film like Blazing Saddles couldn’t be made today due to its open attacks on the Irish. But not all critics believe that our current “politically correct” environment would be a hindrance to production.

“It’s not the animus towards the Irish that would prevent the film from being made these days,” said Professor James Badwater of the University of Chicago, “It’s just that Blazing Saddles is a victim of its period. For example, a Western in the 21st Century? No Way. Also, our sense of racism has quite radically changed since 1974. Blazing Saddles is not, I repeat, is not a racist film despite the disparaging words used throughout the movie. The film suggests that racism isn’t an inherent personal feeling akin to hate, but is only fear of the unknown. This is quite different from the current hateful atmosphere that drives racism as we enjoy this Trump presidency. Blazing Saddles would have to be completely re-written and even then I bet it wouldn’t fly.”

As for the protestors and their leaders, they’re not giving up until the Del Oro Theater removes the film.

“We’re not giving up,” continued a ventilating Ms. Ramun over her megaphone. “We’ve got a culture of hate and anger running through our country now, and I’m not going to stop until I’ve destroyed all of it.”