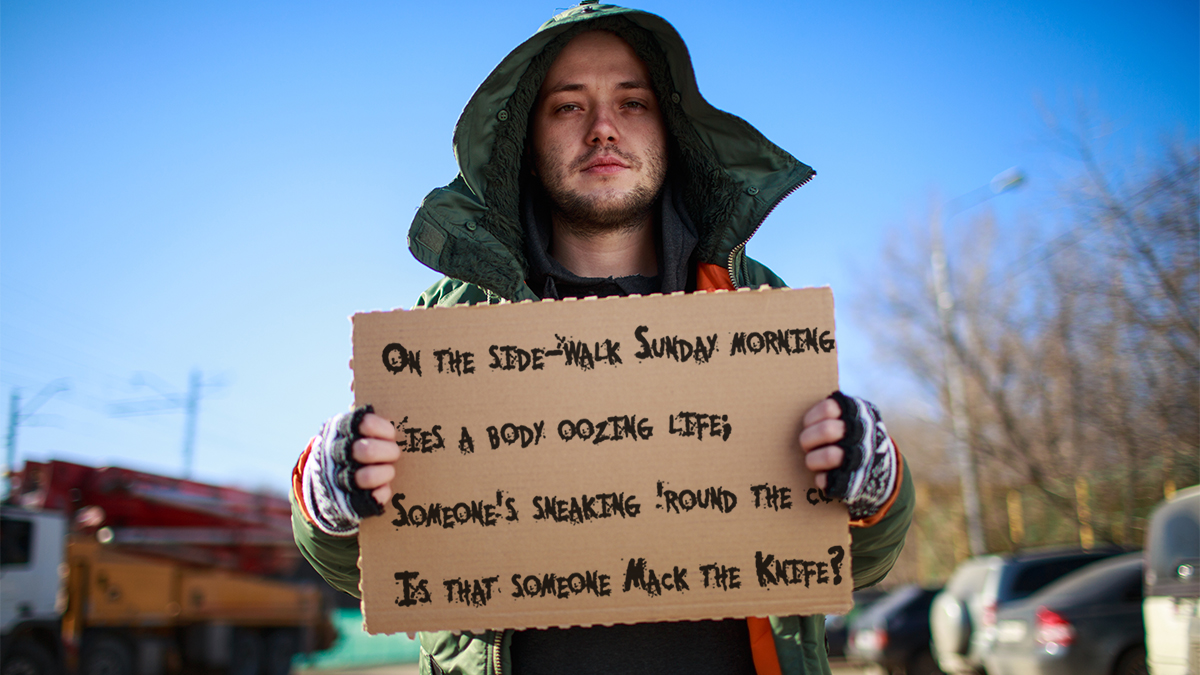 Nevada City, CA — The Nevada City government, with the police department have written a new ordinance that requires all homeless individuals, or anyone who looks homeless, to sing the 1928 Kurt Weill/Bertolt Brecht song Mack the Knife to receive any amount of county benefits. The song, which originally appeared in the Prelude of Brecht’s The Threepenny Opera in 1928 and then late a world hit in 1959 by crooner Bobby Darin,  tells the tale of a murderous criminal named Macheath (Mack) who helps organize the homeless. The song was chosen randomly and with little thought.

According to the ordinance, homeless people can choose one of three songs to sing three times a day, one being Mack the Knife, the other being My Way made popular by Frank Sinatra, and lastly in trying to keep the City “hip and modern your younger demographics”  Damn It Feels Good To Be A Gangsta by the Geto Boys. However city leaders are hoping the destitute will choose Mack the Knife because “it’s a nice ditty that won’t bother tourists.” The Police will be charged with making sure each homeless person sings one of the songs at least three times per day, after which they will receive a voucher for shelter and one meal.

According to Brecht, The Threepenny Opera is a story about beggars for beggars, hence the title which is what he figured the homeless of the era could afford. Threepenny is  a fun musical that doubled as biting satire, throwing stone after stone at the corruption of the government and its supporters. It was also critical how cold-hearted people can be towards the less fortunate, highlighting how the elite classes use the working classes to marginalize, attack and even murder the destitute. Macheath, when he’s not busy murdering and causing mayhem, organizes the beggars into unions to better manage and  distribute their panhandling activities. It keeps them ’employed’ and out of trouble.

Mack the Knife, the musical’s most memorable song, cheerfully announces that Mack the Knife is on his way to town, followed by untraceable dead bodies floating up the river, blood on the sidewalks, and the disappearance of rich people and their cash. It’s a murderous Robin Hood song for the victims of capitalism. (Brecht was an ardent Socialist).

When news broke of the ordinances, some of the county’s best and brightest spoke up in favor of it.

“I don’t have to worry anymore about pounding-down one of those losers if I have to defend myself,” said Grass Valley resident and sheet rock “specialist” Nile Louis. “And I would, you betcha. But now that they have this singin’ to do, I don’t have to worry about them getting in my face. I was really concerned about the little old lady that they may try to assault. Of course, this is the result of liberal policy enabling this behavior. Oh, I forgot, we’re supposed to provide shelter, food, cell phones, education, booze, cigarettes, and medical care to these despots for free. Now they have to earn it like I do every day. I mean, once I’m off of disability.”

According to the advocacy group, the National Coalition for the Homeless, about 25% of the homeless population suffer from severe mental illness. And drug and alcohol abuse are rampant, complicating their recovery into more productive citizens.

Despite celebrations from area knuckle-draggers, several literate citizens have objected to the new law.

“Mom always said that the chief goal in life was to avoid being ironic,” said Cottage Street resident Stacy Grant after hearing about the new ordinance. “And you can’t get anymore ironic than this. Have they ever listen to the lyrics? What’s next? Impromptu guerrilla theater versions of the The Threepenny Opera on Broad Street. We’re at a new level of stupid and recklessness. Many of these jerks who attack the homeless also call themselves Christians. Remind me again why I’m an atheist?”

The “Take Back Our Streets with Song” ordinance, as it’s being called, is scheduled to take effect next month.