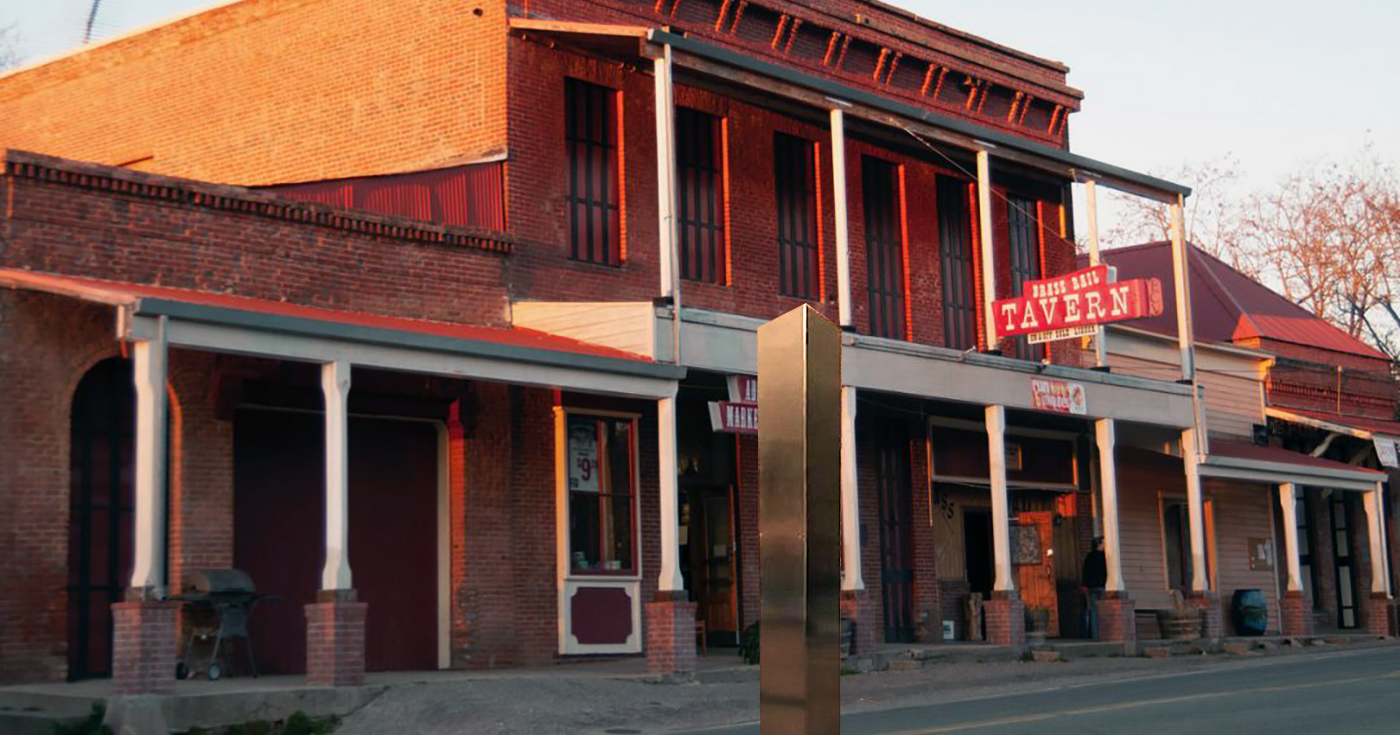 North San Juan, CA — The mysterious monolith that recently vanished from a remote Utah desert has reappeared in North San Juan, CA. The unexplained monolith found in a remote area of southeastern Utah mysteriously disappeared over the weekend, authorities announced Sunday. The sleek metal structure inspired worldwide curiosity and theories of its origins after a team of public safety officers found it last week.

According to the Nevada County Sheriff and the California Highway Patrol (CHP), the mysterious monolith secretly appeared in front of the Brass Rail Tavern in the middle of Highway 49. Longtime “Ridge” resident Shep “The Ship” Walkins told the Beacon that the strange sculpture was anchored “down into the dirt through the highway,” implying that great effort went into making sure the monolith wasn’t going anywhere.

“I suppose whoever did this mischief made a lot of noise, but I reckon no one heard it because everyone was drunk in the [Brass] Rail,” commented Mr. Walkins. “I kinda like it, you know? I mean, as long as it doesn’t bring too many people here to look at it.”

Although law enforcement can’t explain the appearance of the monolith, longtime local  North San Juan resident and self-proclaimed expert conspiracy researcher Skyy Wolford announced to a somewhat disinterested crowd out in front of the Sierra Super Stop this afternoon that the structure was a warning from elites about the pending “planned depopulation.”

Mr. Wolford, who was recently in the news following his landmark Wi-Fi disability settlement, has been studying what he calls “the monolith anomaly” for the past three weeks.

“Look,” said Mr. Wolford, “It’s straightforward to prove they’re coming to kill us. All you have to do is answer these three questions. Number one. Have you ever seen the movie 2001? Two. There’s this thing called the plandemic run by Bill Gates, the bankers, and George Soros, who created a virus to seize control. And lastly, number three. This monolith is making a tour to warn us of the dangers of microchipping vaccines. If you look closely at it, it looks like a huge syringe.”

Several observers noted that it does not look like a syringe, but rather a long, shiny metallic box.

Asked why the monolith was placed in the remote, relatively sparsely populated town, Mr. Wolford bristled.

“It chose us. It wasn’t placed or installed here,” said Skyy with an air of contempt. “It came here to tell us something. And I believe that the Ridge [The North San Juan Ridge] is a place where we might be safe from the Gates Foundation. Just like the life and waterless parts of Utah are.”

The CHP said it plans to leave the monolith in place, as its officers typically don’t stop in North San Juan due to safety issues. The Sheriff noted that “it will probably just disappear anyway in a few days.”