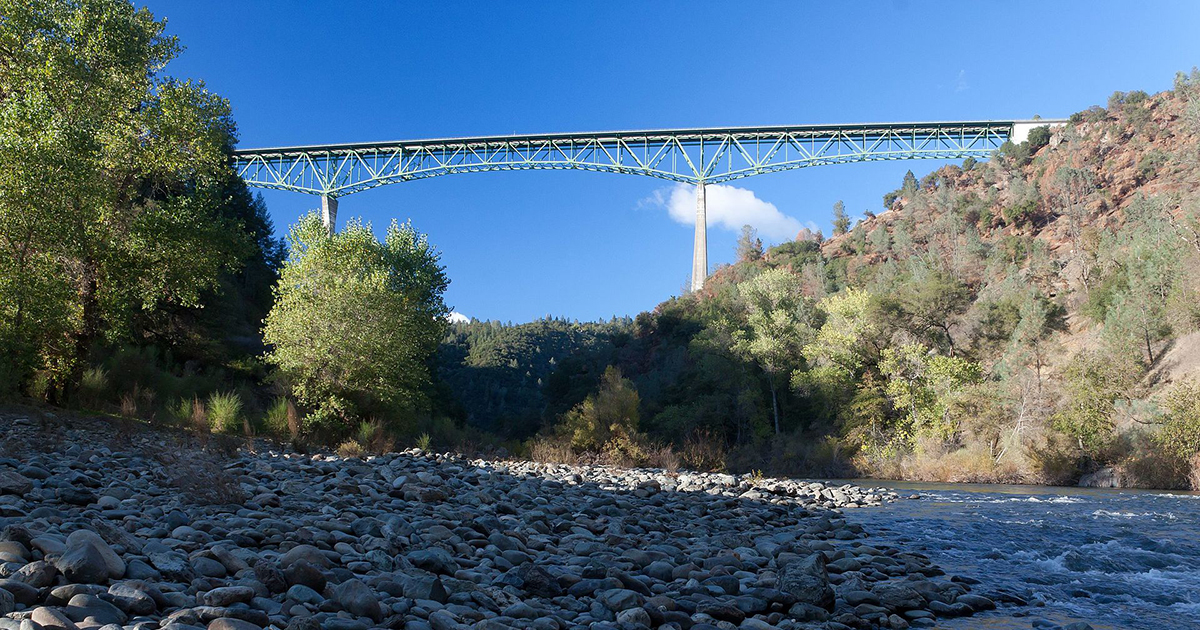 Sacramento, CA — A Mokelumne Hill man is in critical but stable condition after falling from the Forest Hill bridge in what at first appeared to be a failed suicide attempt, but then officials speculated was an accident. Robert Allen was checked into UC Davis Medical Center in Sacramento with gun wounds he sustained while under the influence of heroin earlier this week.

According to a police report filed by the Placer County Sheriff, Mr. Allen, 38, became distraught after an undisclosed domestic dispute with his long-time girlfriend. Mr. Allen had decided to either take his own life or at least get high. He chose to take heroin while parked at the scenic overlook at the county’s tallest bridge.

Unfortunately for him, while making his way across the bridge after taking a non-lethal dose of the opiate, Mr. Allen accidentally shot himself in the foot with a small handgun. He tumbled over the side of the 730ft bridge.

Two homeless men who were camped under the bridge saw Mr. Allen tumble from the bridge and alerted authorities that a man had landed on a stack of Tempurpedic mattresses.

“Me and Jake were having a smoke between storms,” said homeless man Harry “Herb” Sepulveda describing the events of the day. “We heard this, gunshot and then someone shouted ‘god damn it’ from the bridge. Next thing we knew, this fella was falling. Jake was like, ‘oh shit, another one.’ I coulda swore the guy was swearing all the way down.”

“Yeah, that lucky bastard hit the only pile of mattresses on the American River,” said fellow homeless man Jake Lamotta. “We just kind of sat there for a few seconds just staring at him on the mattresses. I went up to flag a car, and Herb went down to see if he was OK.”

Placer County Search and Rescue aided by Reach Helicopter services were able to extract Mr. Allen, who was conscious and “swearing like a sailor,” according to paramedics, and transport him to UC Davis.