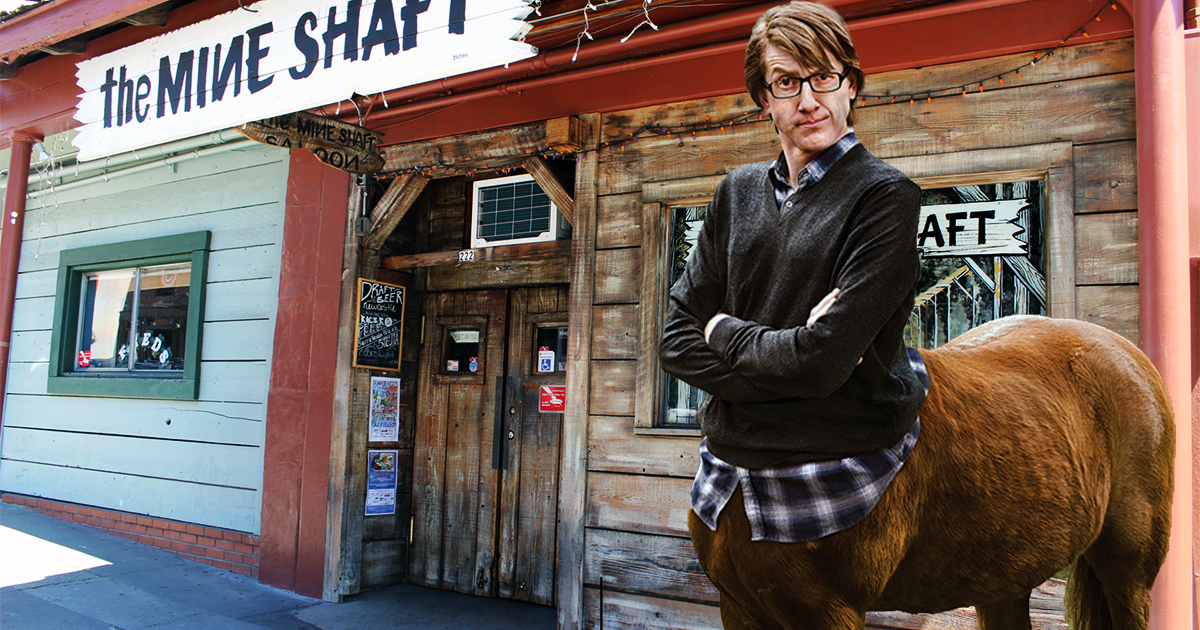 Nevada City, CA — Life isn’t all hoofs and galloping for area centaur Royce C. Bradley. The 138-year-old centaur, whose mythic given name is Pholos Jr., has had trouble fitting in with the local social scene. And this mythical-creature-gone-hipster can’t make friends despite a warm and generous welcome at the Nevada County Horsemen’s lodge on Bubbling Wells Road.

“They’ve been nice to me over at the Horsemen’s, but I gotta get out and sow my oats if you know what I mean. There’s more to talk about than just horses.”

Over the past month, Mr. Bradley dared to go to the town at night. But he struggled to make new friends.

“I just don’t get it. Everywhere I go, people look at me rather weird. I mean, it’s hard enough to get into bars physically. I get that. But I wish people were more receptive, you know?”

Mr. Bradley arrived in Nevada City two years ago from an undisclosed location. Since then, he can’t seem to get locals to accept him.

“At first, I thought it was because I was a flatlander, but I’m pretty sure that’s not it. No one knows where I’m from. And it couldn’t be that I’m half horse because people love horses around here. I think it’s my sweaters and the fact that I have this tendency to crap indiscriminately where ever I go. But I don’t know. No one will tell me.”

The Community Steps Up

Recently, the popular downtown Nevada City watering hole The Mine Shaft made special accommodations for centaurs. It was the nation’s first attempt to extend such a gesture to hybrid humans.

“To be inclusive of all creatures,” said a sign posted on the door of the Mine Shaft earlier this week, “The Mine Shaft has decided to allow centaurs and select minotaurs into our establishment. Please be mindful of their presence and look for piles of crap.”

When asked why all centaurs and only “select” minotaurs were allowed on the premises, The Mine Shaft management said, “well, minotaurs have a problem holding their drink. Look it up.”

After speaking with several local bar-hoppers, Mr. Bradley’s worries might be in his head.

“We love that mofo,” said frequent Mine Shaft patron Irus McNutt who says she’s been coming to the famous saloon every day for the last 20 years. “No one cares who or what you are here. He needs to lighten up and stop worrying about what people might be thinking. Here, everyone is drunk. They’re just thinking, ‘don’t fall over, and ‘that bastard Doob owes me $14.00.”

As for Mr. Bradley, he’s not giving up, but he still feels discouraged.

“I went into the ‘Shaft last night, and people were creepily nice if you know what I mean. Too nice. But that didn’t matter because I knocked over a few tables and had to go anyway. I’m not giving up, but it’s frustrating. Think about how hard it is for me to drive a car. Life’s not easy.”