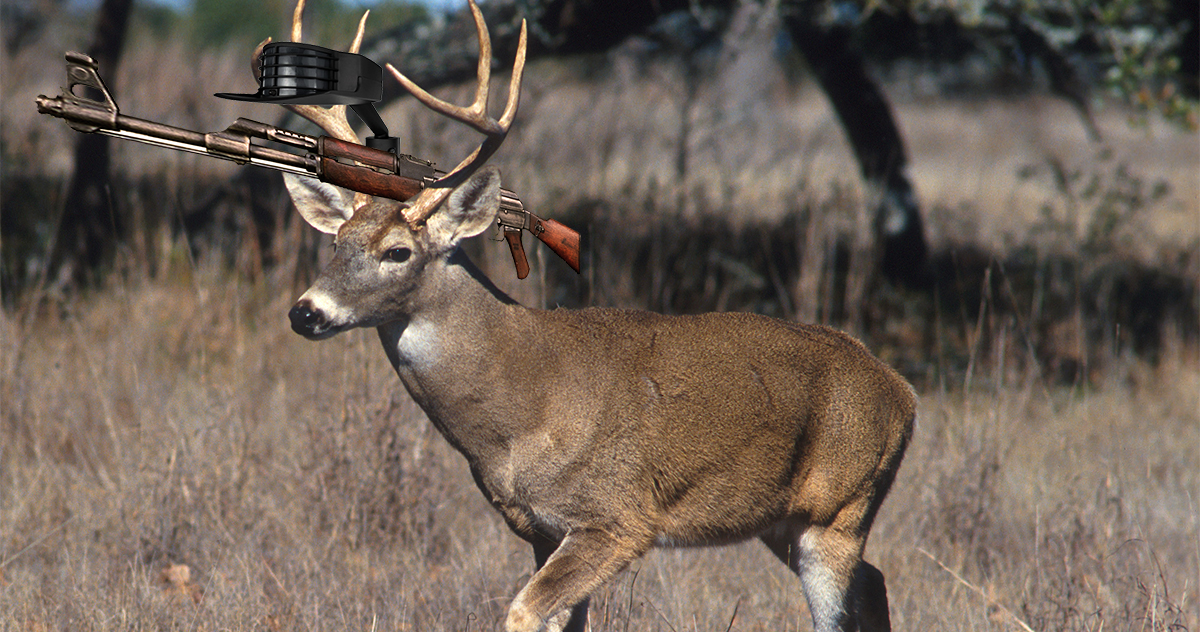 Nevada County, CA — Local animal rights advocates working with the Nevada County chapter of the People for the Ethical Treatment of Animals or PETA announced on Tuesday that they are proceeding with their program to “give the animals a fighting chance” by arming them with semi-automatic rifles.

After a heated debate on a Nevada County Facebook group, animal activists have decided to introduce “balance” into the local ecosystem by arming wild animals with weapons.

“It’s pretty simple,” said activist Alisha Hail of Nevada City. “With a bit of human help, we can level the playing field of our wild animal populations. We can turn prey into predators.”

According to sources close to the program, the 3-Phase plan calls for placing automatic weapons onto the body and head of wild animals with sensors to automatically fire when motion is detected within 100 meters.

In Phase 1, activists hope to arm deer populations with front-facing AK-47 replicas. In Phase 2, they hope to arm cougars and bears followed by the arming of rabbits, hares and squirrels in Phase 3 sometime in 2019.

Not Everyone Thinks This Is A Good Idea

“I’m sure nothing will go wrong,” said a sarcastic Tiffany Rodas from her Banner Mountain home. “We have to control the wild animal populations because humans have killed off or chased away their predators, but arming them? Just think about how stupid that is for a minute.”

According to wildlife officials, they know nothing of this armed animal initiative and say it would be a violation of the law to give loaded weapons to animals. Also, there is a chance that automated weapons might have the unintended consequences of harming other wild animals.

However activists dismissed these concerns.

“Look, the only way we can save these species and put humanity on alert is to level the playing field,” continued an annoyed Ms. Hail. “Sure there will be collateral damage, but at the end of the day  things will be more equal and the balance of nature will be restored.”