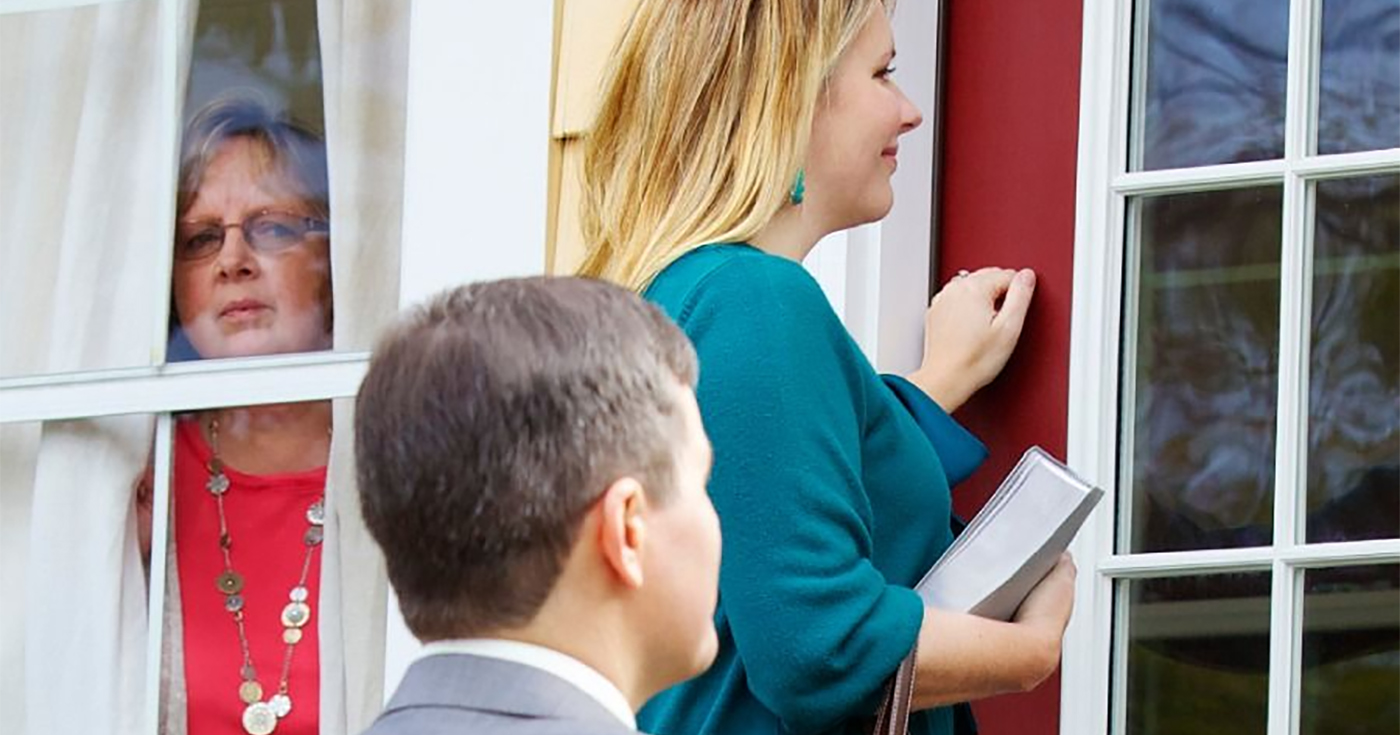 Grass Valley, CA — The millenarian restorationist Christian denomination known as the Jehovah’s Witnesses announced via the April edition of their Watchtower magazine that “we know you’re home.” The evangelical organization, known for its door-to-door preaching and occasional “Christian stalking,” said it fully plans to take advantage of the government’s stay-at-home orders to “spread the true name of God the Father, whose name is Jehovah.”

“With the recent spread of the novel coronavirus, which we believe to be a divine message from God the Father, whose name is Jehovah, we understand this event to be our calling to spread his word and never to let go,” said Grass Valley Elder Nathan Knorr, who interesting was the heir to the Knorr Food family fortune before his JW conversion in the 1980s. “We have a target-rich environment and just a short time to witness. So we’ve mobilized a small army of the faithful to go door-to-door in Nevada County.”

Elder Knorr says his flock is not worried about becoming disease vectors for the coronavirus, but instead not “being enough of a ‘faith vector’ for God the Father, whose name is Jehovah.”

“This is clearly in His hands,” continued Elder Knorr. “And by his hands, we will be protected, as will be those who turn towards him.”

Although mandatory, police-enforced shelter-in-place orders have not been issued, local police departments and county health officials have expressed concern about the Jehovah’s Witnesses’ aggressive tactics. One official chose to remain anonymous, suggesting that they should be apprehended and escorted home. However, the source admitted “that such an action would probably only embolden them.”

As word spread of the Jehovah’s Witnesses mobilization, the reaction from the community was swift.

“I used to shut the drapes and hide behind my couch when I saw them in the neighborhood,” said Karen Barstad of Nevada City, reflecting on past experiences with the religious sect. “But now they know I’m home—all the time. So I plan on leaving my Pitt Bull outside and my rifle on the porch. You know, just a message.”

Still, others had a sense of humor about it.

“Me? I’m just going to stand in my doorway naked when I see them coming,” commented Grass Valley’s James A. Beard from his Rhode Island Street home. “I’m going to let my wanger flip around and around for them and the whole world to see. It’s worked in the past with these door-to-door meat salesmen, so it should work with them.”

Despite all of these logistical challenges, Elder Knorr and his flock are undeterred.

“If this were easy, God the Father, whose name is Jehovah, wouldn’t need us. It’s these struggles that make our work more impactful.”