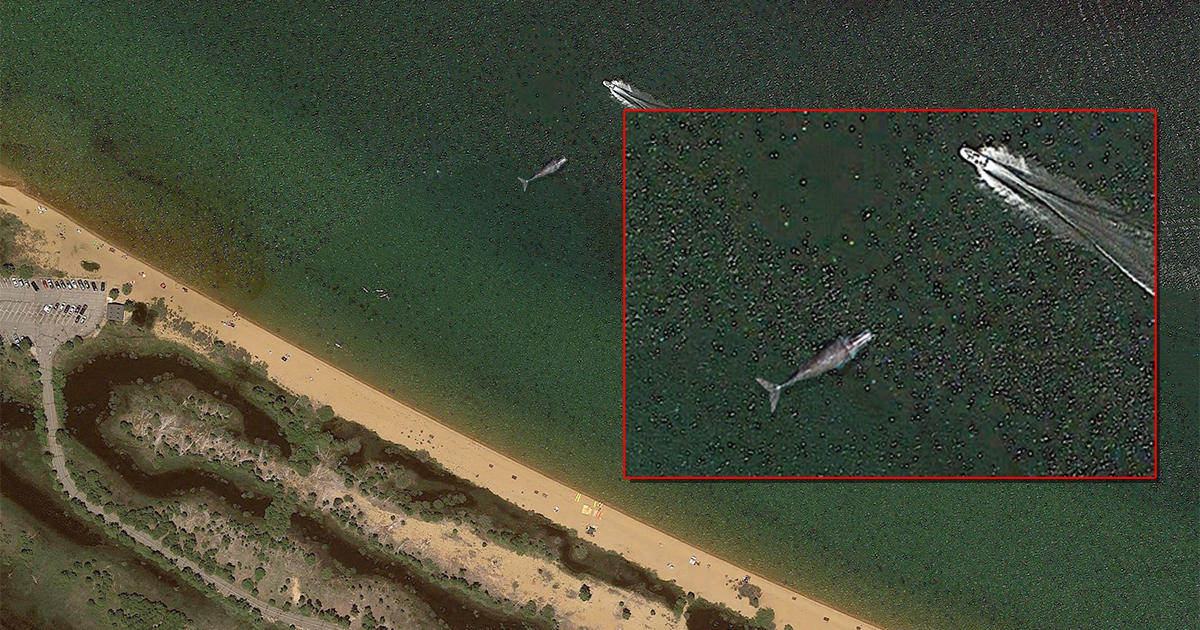 Lake Tahoe — A team of scientists from Brigham Young and Southern Methodist Universities say they have visual evidence of a stranded humpback whale in Lake Tahoe. The archaeological team, which has been searching the lake for evidence of lost cultures, says they ran into the creature exploring some ancient ruins.

“You have to understand that we weren’t looking for whales,” said lead SMU anthropologist and team representative Dr. Henry “Hank” Starnes, Ph.D. of the team that made the discovery. “We spotted the whale via one of our drones and snapped a few pictures and then reported the activity to the fish and game people, who laughed at us. But then I showed them the footage and they immediately started making calls.”

Then the story gets strange.

“We had to bring the drone back in because the batteries were low, and when we sent it back out, we couldn’t find the whale anywhere. It was almost like it vanished.”

A Local Expert Speaks Out

“Look,” continued Mr. Wolford, “I’ve been studying classified NASA documents for a long time, and something was just not right about them. I mean, they use these big coded words than normal people can’t understand. It was only after a few years of reviewing them that I began to see the grand alien conspiracy developing: elites on our planet are giving away natural resources to a superior alien race. Except there’s one thing, the whales are here to protect us.”

Mr. Wolford is not a scientist, nor does he have any scientific training. He did spend two semesters at Sierra Community College studying psychology until he decided “school was not right for him.” The 34-year-old retired to North San Juan to sell fake local crystals to Yuba River tourists that he sourced from Malaysia.

Since then, Mr. Wolford has focused his attention on what he feels are the most pressing issues of the day: FEMA camps, the campaign to forcibly poison us with vaccinations, and of course the global extraterrestrial conspiracy to steal Earth’s natural resources.

“The whales are the key to our survival,” continued a mood-elevated Mr. Wolford. “There was an allusion to it in the 4th Star Trek movie. You know, the one with the whales? They were put here long ago by a superior intelligence to watch over us, and these lower invaders know this. I don’t know how that humpback got into Lake Tahoe. Maybe it was trying to hide or something? But I do know how it vanished.”

Mr. Wolford says the whale was abducted as it was blocking “resource harvesting” in Lake Tahoe. He says that explains the frantic calls by government officials: they were contacting “the alien overlords.”

Both the Nevada and California Departments of Fish and Wildlife denied contact with the university research team, saying “we know nothing about a whale.”

The Nevada department went so far as to issue a memo stating, “it is ridiculous to suggest that a humpback whale could be in Lake Tahoe, and worse, that there’s a galactic conspiracy to steal Earth’s resources.”

As for Professor Stearns, he knows what they saw.

“It’s pretty clear there was something on that camera. It wasn’t a boat. It wasn’t a fish. It was huge and then it wasn’t there anymore.”