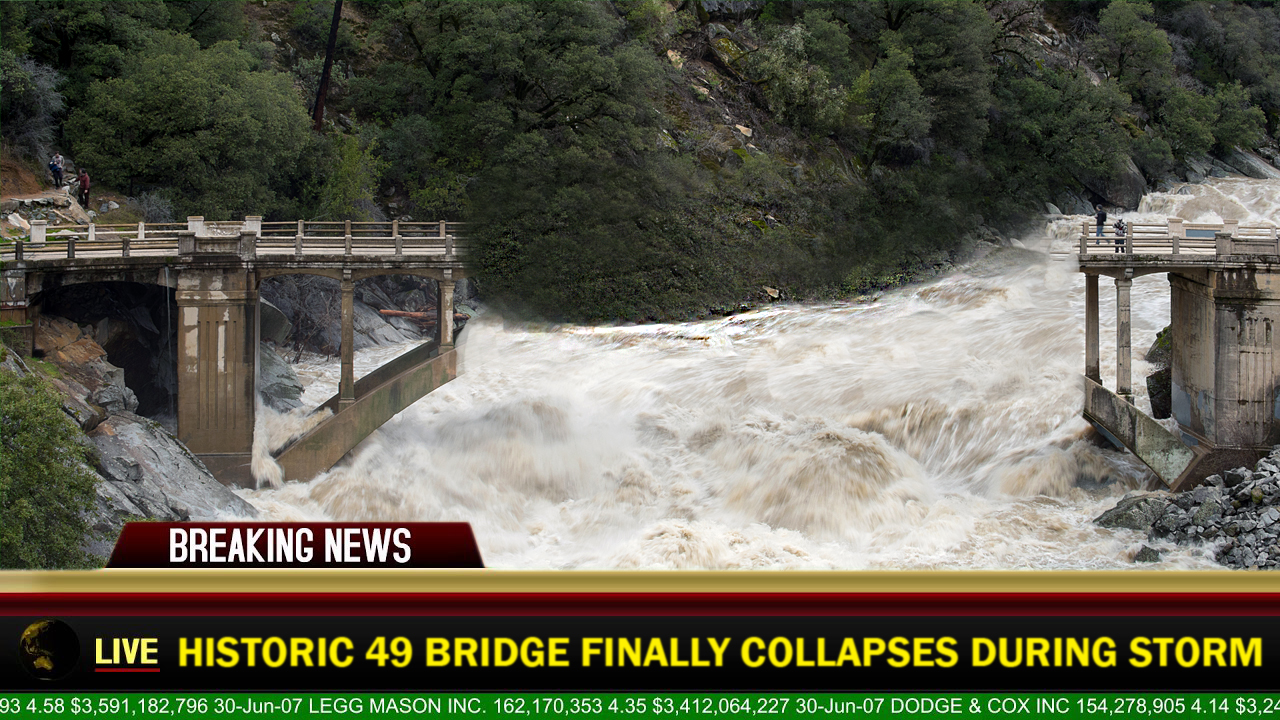 Nevada City, CA — The historic highway 49 bridge built-in 1927 has finally collapsed into the South Yuba River, confirming local social media posts over the past ten years that it was doomed. No injuries were reported despite dozens of people flocking to see it.

For decades, many Nevada County residents were convinced that “this is the year” that the old tourist attraction would tumble into the raging winter waters of the Yuba River. With each passing rainstorm, locals would predict the demise of the historic bridge. With the aid of Photoshop and a generally stupid social media audience, the bridge was able to fail within 20 minutes of using the clone stamp tool.

At the end of every rainy season, the fact that the bridge survived only heightened the anxieties of locals. And despite this obvious ruse, many took to social media to chest-thump their “I told you so’s.”

“I’ve been telling anyone who’ll listen that the bridge’s time has come,” said long-time Nevada City resident Toby “Doob” Carnvale at the popular downtown bar the Mineshaft. “I said it in 1983, 1997, 2010, 2018, and even in several alcohol-fueled rages. But would anyone listen to me? Nope. Never. I bet they’ll listen to me now, I’ll tell ya.”

2022/23 has featured about average rainfall for the Sierra Nevada Foothills; however, above-average snowfall in the mountains and recent warm rains have fueled flooding speculation. Nevada County residents took to social media to vent their anxieties when they didn’t materialize.

“I just kept waiting and waiting for the bridge to fail,” said Cottage Street Marg Brandt between puffs of her Pall Mall cigarette. “I told anyone who’d listen to stay off that bridge. Then, when no one would listen, I started posting pictures of the 1997 flood to scare people. You know, that’s when the water came up over the bridge. I’m scared, so I figured they should be scared too.  Anyhow, I’m not one to say I told you so, but I told you so.”

CalTrans plans to rebuild the bridge using funds recouped from the now-defunct California High-Speed Rail project, which would amount to one additional Photoshop license. However, they provided no timeline for completion.