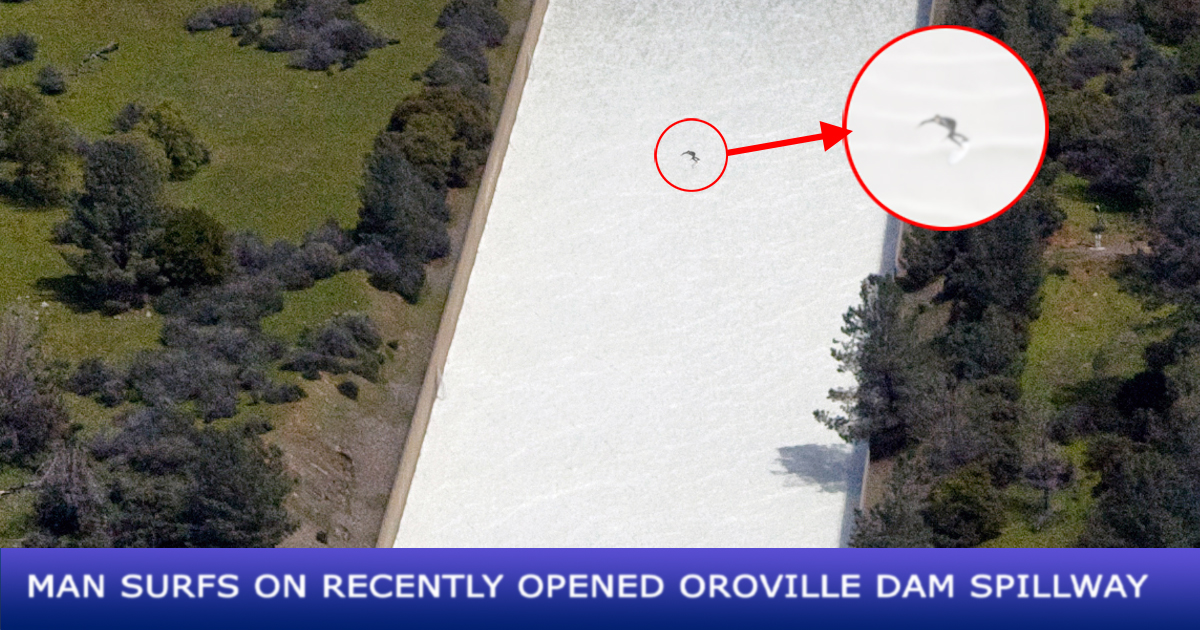 Lake Oroville, CA — It never occurred to Grass Valley’s Seth Mastrangelo that he could get in trouble for surfing. However, authorities briefly detained and cited the 29-year-old self-proclaimed ‘ganja surfer’ yesterday after he decided to celebrate the troubled Lake Oroville Dam spillway’s re-opening.

“I’ve done this for over ten years now,” said Rhode Island Street resident Mr. Mastrangelo during an interview later in the day. “I mean, I was bummed when they shut it down last year. No one ever cared until they had all these TV cameras on the dam. But, man, this sucks.”

Seth grew up in Nevada City, CA, after his parents split up when he was 6. His father remained in Pacifica, and his mother moved to Nevada County. And despite the 3-hour drive to the ocean, Mr. Mastrangelo never lost his love of surfing, which his father introduced to him at an early age.

Mr. Mastrangelo says when he can’t make it down to Pacifica to catch some “gnarly a-frames,” he used to enjoy “the clean setups” that the Oroville Dam spillway provided. That is, until yesterday.

“There’s nothing like surfing by yourself on the Spillway,” continued Mr. Mastrangelo. “And after they fixed it up real nice, I was flying down. It was foamy and fast. You know, it gets tricky at the bottom with those breaker things, but if you play it right, you won’t get hurt. Anyhow, they told me not to do it again.”

“Seth Mastrangelo is lucky to be alive,” said Butte County Sheriff spokesperson Bethany Millbright early this morning. “We don’t understand how he has not perished in previous attempts. We want to stress how dangerous this activity is and that it is not only illegal to surf the spillway, it is incredibility stupid.”

As for Seth, he promised this was his last time, with a wink and nod.

“Man, I don’t get what the big deal is. As I said, this is nothing compared to the epic North Shore. No one cared about it until the dam broke. Man, what a bummer.”