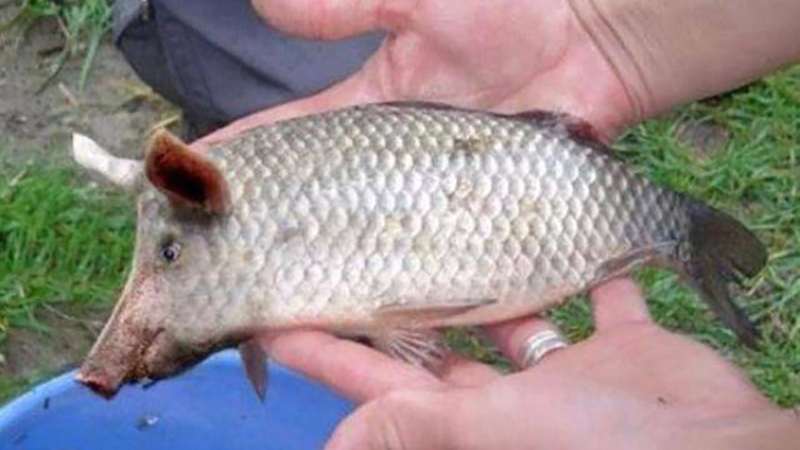 Nevada County, CA — Area handyman Hank Snow believes he’s caught a once in a lifetime fish from Scotts Flatt Lake,  which is located a few miles east of Nevada City, CA. The fish, which appears to be some kind of carp/pig hybrid, is believed to be a missing genetically modified creature which escaped a laboratory at U.C. Santa Cruz earlier this year..

“I was fishing out by the dam,” said Mr. Snow trying to gather his words, “when I pull this one in. He didn’t put up much of a fight. In fact, I didn’t even know I had a fish on. I gotta tell ya’ this is one of the weirdest things I’ve ever seen. I just reeled it in and found this weird thing on the hook,” explained Hank, pointing at the fish for clarification. “I’m glad they brought photographers.”

“We brought half the oceanography department to look at this fish,” said associate UCSC professor Taylor Friscas in a Gish Gallop telephone interview. “And it was certainly the one that got away.  It happened when we were investigating the shark attack here last year. It seems a graduate student thought it would be funny to release some of our freshwater GMO experiments into Scotts Flat [Lake]. This ‘pigfish’ was one of them. The other one, well, I’m afraid I don’t want to discuss it at this time.”

As for Mr. Snow, he didn’t get to keep his catch, as rangers from the National Park Service and the University of California were told by authorities to confiscate it.

“Yeah, that was a little bit awkward,” continued Mr. Snow. “Them taking it n’ all. But I wasn’t about to eat it or anything. I mean, who wants to eat that? Not me, for sure.”