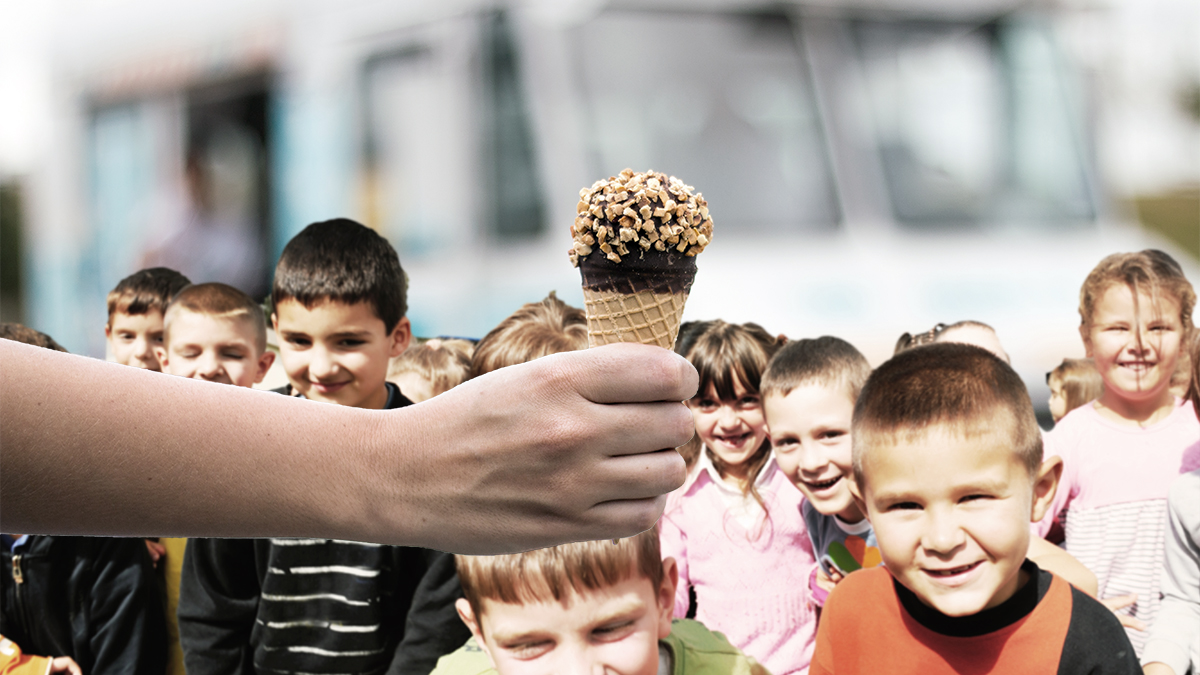 Grass Valley, CA — An area father thought it would be a fun to pick up his 6-year-old child in an ice cream truck.

Bryan Kranstein of Grass Valley always arrived promptly at 3:10 to pick up his first grade Johnny in his trusty 2004 Ford Ranger pickup. However earlier in the week on a whim, the elder Kranstein purchased a fully functioning 1987 Chevrolet diesel ice cream truck from Dansten’s Used Cars in nearby Roseville, CA.

“I’ve always wanted an ice cream truck since I was a kid,” said Mr. Kranstein later in the day after the incident. “I’ve been out of work for a few months, and I thought it would be fun to strike up an ice cream truck business in Nevada County seeing there’s not one around here. Anyhow, she’s a real beauty,” continued Bryan tapping the white side of the vehicle. “It’s got a Diesel Yanmar generator and a genuine Dairy Queen electro freeze. Heck, it even makes Slushies. I just didn’t think it would cause the incident that it at Scotten [School] today.”

According to eye witnesses, the ice cream entered the pickup line at approximately 3:15pm. At 3:30, when the children were dismissed from school and began to line up, it was then that Mr. Kranstein started his motor and turned on what anyone would recognize as “the ice cream music.”

“I thought the kids would love it,” continued Mr. Kranstein, “but it turns out they loved it a little too much. And the teachers. Boy, I thought they would have exercised a bit more restraint.”

About a minute after Mr. Kranstein cranked the ice cream music, children began rushing from their pickup area towards the truck. Several began to climb over cars just to get first in line, denting several hoods. More surprising however, was the teachers’ reactions. Several instructors began running in earnest knocking over children in the process.

“It was pandemonium,” said 4th Grade Scotten School teacher Beth Corny-Rosenack, a 15-year veteran. “Mayhem is a better word. I’m just glad no one got hurt. But the real disappointment was that the guy didn’t have any ice cream.”

“Well, that’s the thing,” said a somber Mr. Kranstein. “I really didn’t have anything stocked or even turned on. When the teachers and the kids found out that I was empty, that’s when they started rocking the truck. It got hairy there for a few minutes.”

According the Scotten Principle, who had to break-up the near ice cream riot, he managed to bring calm to the situation. He asked Mr. Kranstein not to bring the ice cream truck to the School again.

“We have rules and such,” said Principle Richard Cross. “You just can’t do stuff like that. However, maybe in the future he can help us out with a fund-raising event or something like. Just not in the pickup line.”

No charges were filed with the police.