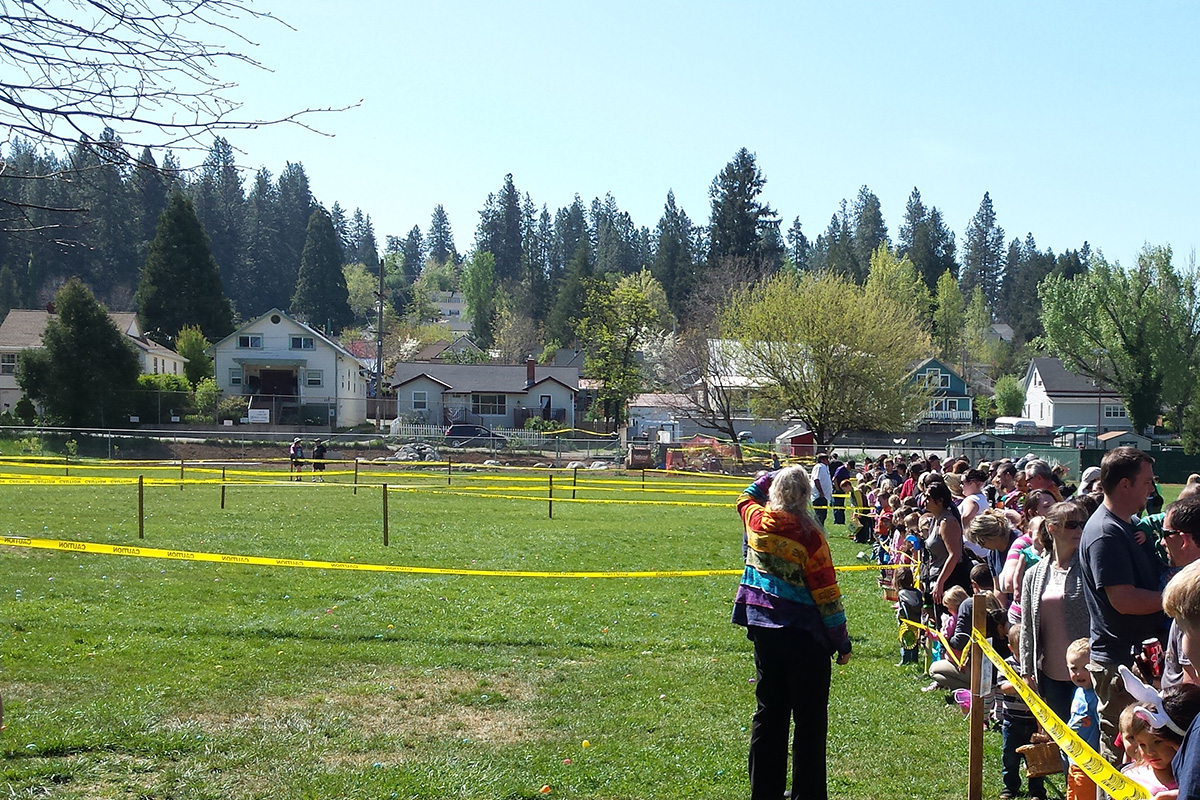 Grass Valley, CA — Producers of the popular US documentary TV show Hoarders, which depicts the real-life struggles and treatment of people who suffer from compulsive hoarding disorder, announced late Saturday night that they couldn’t be more thrilled with the results of the recent Easter Egg ‘hunts” in Grass Valley, CA.

“These are valuable American skills,” said A&E Hoarders producer John K. Duke in a Gish Gallop telephone interview. “And we are thrilled to see parents instilling these aggressive values into their children as such an early age. This ensures at least one more generation of enabled consumers who are the perfect demographic for our show. We’re gonna run longer than the Simpsons, for sure.”

Easter Egg hunts or “dashes” are typically organized by community groups for fun. The events involve volunteers placing both real and hollow plastic eggs filled with candy in a field, and then allowing children to trample each other to hoard as many as possible. Often parents can be seen shoving other children and parents out of the way to insure their child’s bounty. Some parent openly cheat.

“This is one of the few times a year I can do something with the kids that’s free,” said Grass Valley single mother of two 2 Shelly Wagner. “They have such fun and they get to learn about how you have to fight to get what you want.”

Critics of the such “dashes” maintain that such events do not instill more virtuous elements of a civil society, but rather teach children that competition over resources and hoarding are commonplace. These activities contribute to a sense that there is a battle for prosperity, and that your neighbor is queued-up to take their possessions from them. More over, it reinforces a myth that resources are scarce, and that one must capitalize on them to prevent one’s neighbor from prevailing over them.

“It’s highly ironic that these egg dashes take place during the Christian holiday of Easter,” said Berkeley Divinity School Associate Professor James Badwater. “This holiday is supposed to celebrate the rising of Jesus and his triumph over Death, and not full-blown Gordon Gecko-style capitalism. Jesus was undoubtedly the last person who would hoard material possession and advocate such trespasses against one’s neighbor.”

Some locals see no contradiction in their Christian beliefs and this wanton hoarding activity.

“I see no contraction between Jesus’ message of compassion and giving and these egg dashes,” said retired  Penn Valley Colonel Jack Ripper. “This is about teaching liberty and enlightened self-interest. It’s a simple concept: you need to be an individual even at the sake of the charity of others. All this anti-Easter egg is pure socialism propagated by Leftists bent on destroying America and our precious bodily fluids. And Benghazi.”

As for the show Hoarders, they’re thinking of sponsoring select egg dashes in the future.

“It’s a green field, as we say in the business,” continued a confident Mr. Duke not realizing his own pun. “Pumping money into the Egg Hunt market is a win-win for everyone. Actually it’s a win-win-win. A win for A&E. A win for the future hoarding behaviors of children. And a win for the American way.”