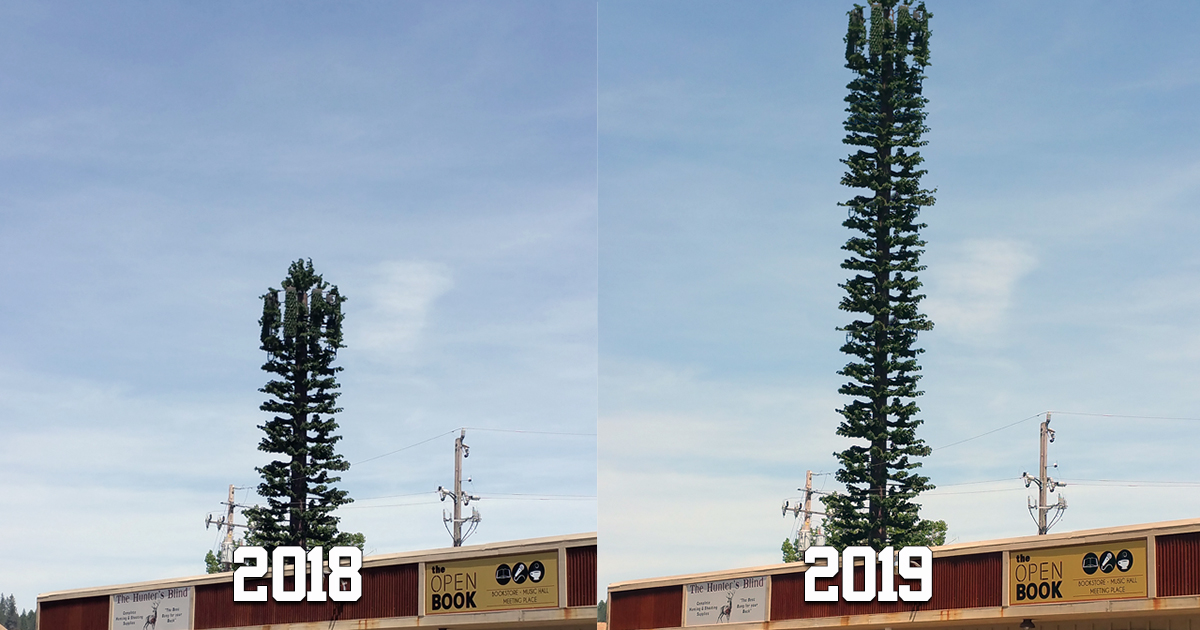 Grass Valley, CA — The controversial cell phone tower with was erected in Grass Valley’s Brunswick Basin has grown by over 70 feet following a record-setting year for rainfall. Erected in 2016 to both praise and jeers, the juvenile mobile antenna has surprised even its operators with its unexpected and spectacular growth.

“The rains really did a number on this tower,” said Verizon Wireless spokesperson Bethany Millbright, the main company who benefited from the installation. “We’ve seen growth from other towers in the area, but none like this. The best part is coverage is already up by over 50% with the increased height. If the area gets the same amount of rain next year, who knows how high it will grow.”

The Nevada County area experienced a record amount of rain over the past year, approaching almost 240 inches of rain which is four times the normal amount. The precipitation was welcome news to most residents. However 5G anti-Electromagnetic activists, while appreciative of the rain, do not appreciate the expanded power of reach of the higher cell phone tower.

“I haven’t slept since they installed it,” said community activist Saihra Ramun speaking out front of Nevada City’s New York Hotel. “And I’m on edge all day long. This new death tower is triggering my Morgellons disease. The EMRs[ElectroMagnetic Radiations(sic)] interact with the slivers of metal under my skin and they start to poke out. See? [Ms. Ramun points to her right forearm demonstrating nothing but the white, somewhat freckled skin of a middle-aged woman.] I’m going to ask the Nevada City council to stop this growth. They have been instrumental in stopping Grass Valley from doing things that harm Nevada City.”

According to experts, there is no cause or even correlation between brain cancer and any other ailments linked to non-ionizing cell phone tower radiation; no more than any other non-ionizing source. A recent study demonstrated that rats dosed with 6 watts of radio waves at 6 inches for 24 hours/day for months developed a 5% increased risk of brain tumors. However such rare studies have dramatically increased the the number of gullible stupid people.


The scientists involved with this study recommended not exposing your skull to 6 watts of 700-2100Mhz radio waves for 24 hours per day over the period of 6 months. They also recommended not being a rat confined into a small metal box. The study also recommended that customers switch to Verizon from AT&T as Verizon’s CDMA technology showed a significant decrease over AT&T’s more European Illuminati-based GSM protocols in rat brain cancer rates, for those rats being forced into small metal boxes.

As for the tower, mobile phone customers can expect better performance in the coming years as the tower continues to grow.

Golf Carts Now Allowed on Highway 49 Between Alta Sierra and...

“You Never Know Until You Try,” Proclaims Area Idiot Running At...