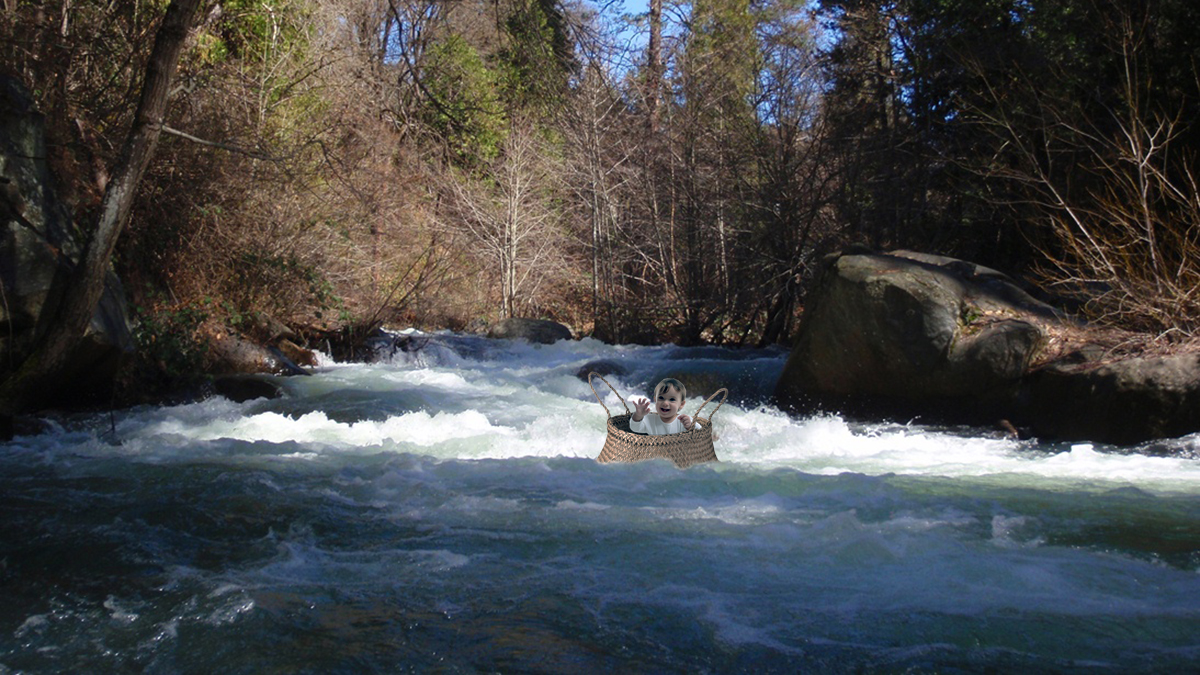 Nevada City, CA — Parishioners from Sierra Presbyterian Church were briefly horrified on Sunday when their re-enactment of baby Moses’ river journey went awry. Things got out of hand right after the small crowd placed an area infant into a small basket in Deer Creek just under the highway overpass, and the swift current swept the child downstream. The child was rescued below the sewage plant by area musician and farmer “Moonash,” who was bathing in the creek.

“I was like, bruh. Whoa! There’s a baby in there, man,” said Moonash speaking to Gish Gallop following the rescue. “I was just down there chilling. I just took this gnarly swim, and then there’s this basket. I grabbed it before it went down the rapids there. You’d think the little guy would have been crying and all freaked out, but he was happy.”

According to organizers, what was supposed to be a story of God’s grace, almost turned into a catastrophe.

“I’m not sure where to begin,” said organizer and church Deacon William Ailes. “The idea was supposed to be an educational experience for our Sunday School kids, but the basket just got away from us. I guess we underestimated the current there. I mean, Moses didn’t go down the river either. He just hid in the tall reeds. But, unfortunately, it didn’t go that way.”

Bystanders watching from above noticed the well-dressed group down at the creek and noted that they started screaming once the basket got away.

“I had no idea what was going on down there, but there were many people in their Sunday bests,” said Nevada City resident Stacy Grant speaking later from the porch of her Cottage Street home. “I just thought it was another weird group baptizing or something else. You know, Nevada City. But then I saw the basket drift away, and everyone started screaming. Two guys in suits jumped into the water, but they were unable to get the basket. I didn’t know there was a baby in it. I just thought they were being freaks for getting all upset about the basket.”

Ms. Grant also noted that the police were quick on the scene.

Several people spotted the basket and the child from the Tribute Trail suspension bridge, which spans Deer Creek downstream but were unable to assist due to their distance from the creek bed. However, several hikers in the area did see Moonash rescue to the child and said there were cheers of joy.

As for Moonash, he’s taking his heroism in stride.

“Look, man, I just did what I had to do,” continued Moonash. “It’s like, you know, all connected and shit. I was there to do what I had to do. And that’s that, you know? So I’m just glad the little critter is OK.”

Organizers were not charged with a crime, but they were cited for having an event without a proper permit.