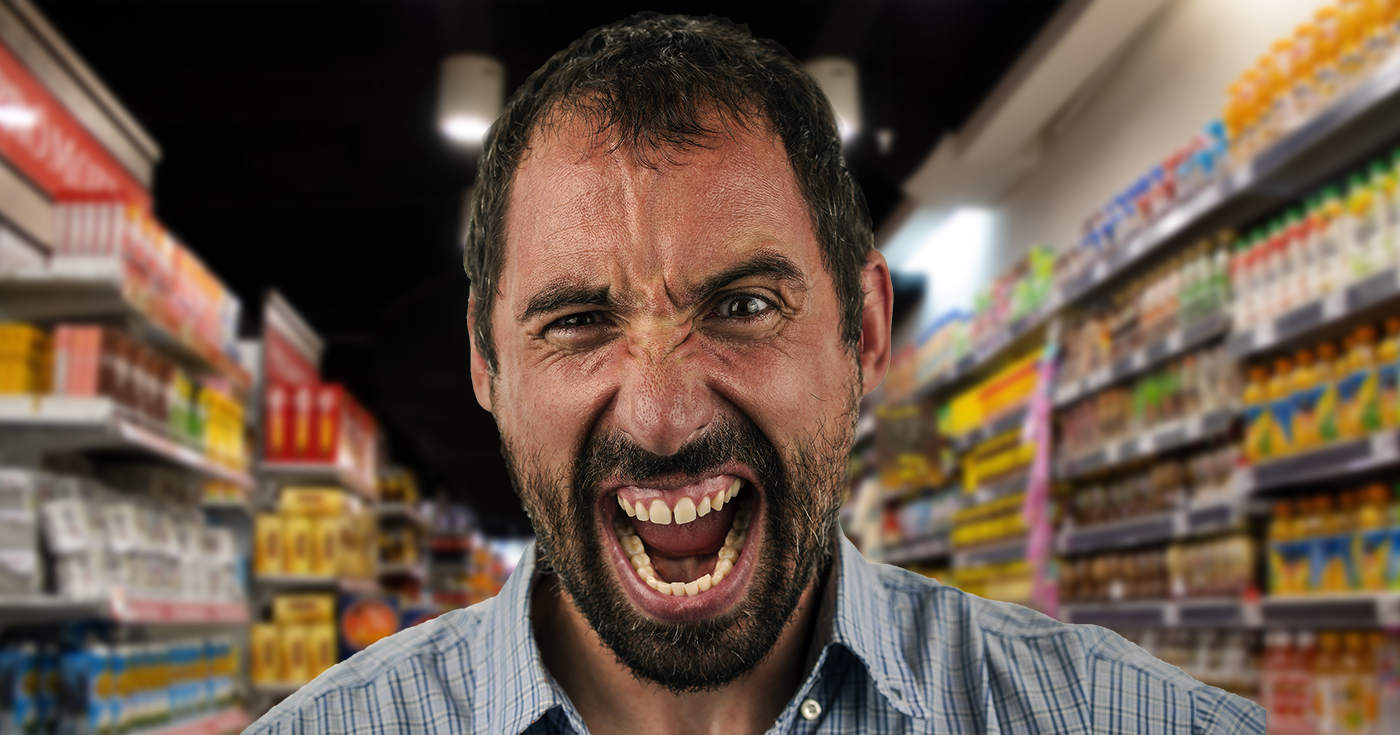 Grass Valley, CA — Area idiot Jesse Hankins is loud everywhere he goes. And it’s not the fact that he’s always heard above the fray in just about every public location; it’s that he’s not aware of just how loud he is.

“Yeah, I brought my bullmastiff puppy in here. He’s in the cart,” said Mr. Hankins in a volume one to two notches louder than is publicly acceptable. “So, I’m making the wife carry the Black Velvet and the Coors. Sometimes they ask me ‘if I need a bottle carrier?’ for all my ‘wine.’ I say why? That’s why I got her,” continued Hankins as if he was giving a speech to the front part of the Sutton Way Safeway.

And sure enough, noted checker Stephen Michaelson, the couple had two carts, each filled with a bullmastiff puppy and a toddler. Ms. Hankins was carrying a bottle of liquor, a 12 pack of Coors light, Huggies brand diapers, and a 20lb bag of puppy chow.

“I couldn’t leave them in the car for Christ’s sake,” said Janie Hankins taking over the Safeway checkout podium. “It’s too damn hot outside.” According to Weather.com, the current temperature in Grass Valley at that time was 74F. “So, we brought them in.”

Jesse started to laugh at apparently nothing, which made the Safeway customers on each side of him quite uncomfortable. And as Mr. Hankins’ mood unexpectedly elevated, Michaelson, recalling his training on dealing with mentally unstable customers, began to expedite the checkout process.

“You see, these are prize bullmastiffs,” continued Jesse, who seemed to be growing irritated as everyone ignored him. “You don’t just treat them like a pound dog or whatnot. You got to treat them like your babies. Better than your babies,” which drew a stern glance from his wife.

And as situations like this happen, as Ms. Hankins took her eye off one of the toddlers to give her husband “the eye,” their 3-year-old started to climb out of the cart, over the plexiglass protector in front of Mr. Michaelson, and over onto the laser scanner. At which point, the dutiful checker maintained his composure, and politely asked Ms. Hankins to remove her child.

“I’m so sorry,” exclaimed Ms. Hankins, who had dropped the Coors Light and the booze and was now forcefully shouting at the checker as if the lack of control was his fault. “I’ve got my hands full here, as you could see.”

The couple paid in quarter rolls and shuffled out of the store without further incident.