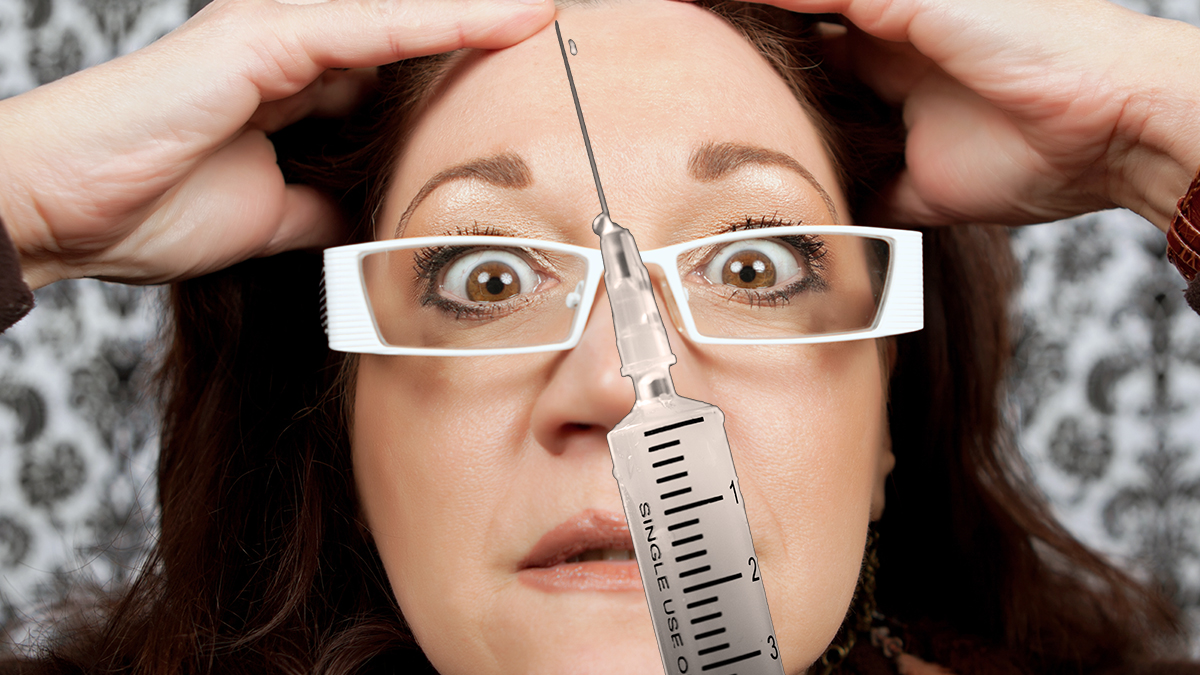 Nevada City, CA — A Cottage Street woman landed in an awkward and dangerous position this week when her strident opinions about the dangers of vaccinations failed to stop a local measles outbreak. Lisa Fellows took to Facebook to warn people about “freaking out” over the “fake news measles epidemic” citing her two unvaccinated children at Yuba River Charter School as reasons not to inoculate.

Ms. Fellows in not a scientist nor a doctor, but she considers herself an expert Internet researcher. And in her opinion, vaccines pose a great harm risk than their disease prevention.

“Well, it’s more than my opinion,” said a fast-talking Ms. Fellows speaking from her Subaru Outback. “I’ve done all kinds of research on these poisons. I could cite you a 200 reasons from the Internet why we have to get rid of vaccines. But when people give me all these facts,” continued Ms. Fellows and she formed imaginary quotation marks in the air, “I just don’t believe any of them because they’re made up by scientists and government shills who are bought and paid for by Big Pharma.”

Over the past few weeks, the measles virus appeared in a number of locations around the country. Health officials point to lower vaccination rates which weaken herd immunity, something that the anti-vaccination movement denies is “a thing.” And Ms. Fellows has a theory about the spike in measles outbreaks.

“There’s no such thing as herd immunity. None. Zip. Nada.  If you’re vaccinated, why worry about people who don’t get stabbed with poisons? And besides, it’s  the Mexicans coming across the border, you know? They have all these diseases. I see it every day on the television. If you want to stop infections, wash your hands and keep the sick immigrants out of here.”

Some of the ‘reasons’ Ms. Fellows mentions in her 20-minute, non-stop tirade come from from several non-reputable websites which in turn misappropriate and alter source studies to fit what her anti-vaccination agenda. In many cases, people in Ms. Fellows’ cohort use emotional and often exaggerated anecdotal narratives to silence debate. Ironically, Ms. Fellows claims she’s the one censored by ‘Big Pharma.’

“Look, we all know families that have gone through vaccine injuries,” continued a mood-elevated Ms. Fellows. “I personally know two families. I mean, two injured families. And there are millions of people who sued in vaccine court and won. That alone tells you how dangerous they are. So don’t tell me that I don’t know what I’m talking about. I’ve done my research. You should do it too.”

The National Vaccine Injury Compensation Program administers Office of Special Masters of the US Court of Federal Claims established by the 1986 by the National Childhood Vaccine Injury Act. During the 1980s, there was a scare about the whole-cell DPT vaccine, which most public health officials thought were unfounded. Between 2006 and 2016, the Office of Special Masters received 5362 petitions, awarding 3626 claims. Not millions.

During this same period, practitioners in the United States distributed over 3.1 billion vaccine doses against 3626 claims. According to Ms. Fellows, this .00011% injury rate is a massive, underreported crisis.

“One injury is one too many. I mean, who can argue with that?” Continued Ms. Fellows going more agitated. “Do you want to experiment with your child? Do you want to take the risk? I have yet to meet any parent who says they would. I’d rather my kids get tetanus or whatever than have all these toxins coursing through their bodies.”

The Anti-Science Agenda: Leave Your Brain at the Door

In a recent Rundex Family Foundation study, most parents with a 12th grade-level education understand that avoiding vaccinations is more dangerous than the risks posed from rare vaccine injuries.

“What we found that what many think are vaccines injuries are correlative,” said Rundex chief researcher Robert Colvin speaking his Mountain View, CA home office. “What I mean by that is sometimes a child will get sick right after receiving a vaccination and assume that it caused the illness. Also, most rational adults understand that getting the measles, hepatitis or tetanus is far more dangerous than the risks from vaccines. And the data bears that out. But what can I say? People only look at the data that supports their beliefs.”

As for Ms. Fellows, she’s not going to allow her anti-vaxx voice to be silenced by the paid trolls of Big Pharma.

“Oh they’re out there,” said Ms. Fellows growing confident. “I deal with them everyday on Facebook. They think they can silence me with their facts and their science, but I know better. There’s more of us everyday who resist the needles and the chemicals in our bodies. If I had my way, everyone would get their immunity naturally, just like they did for centuries.”i