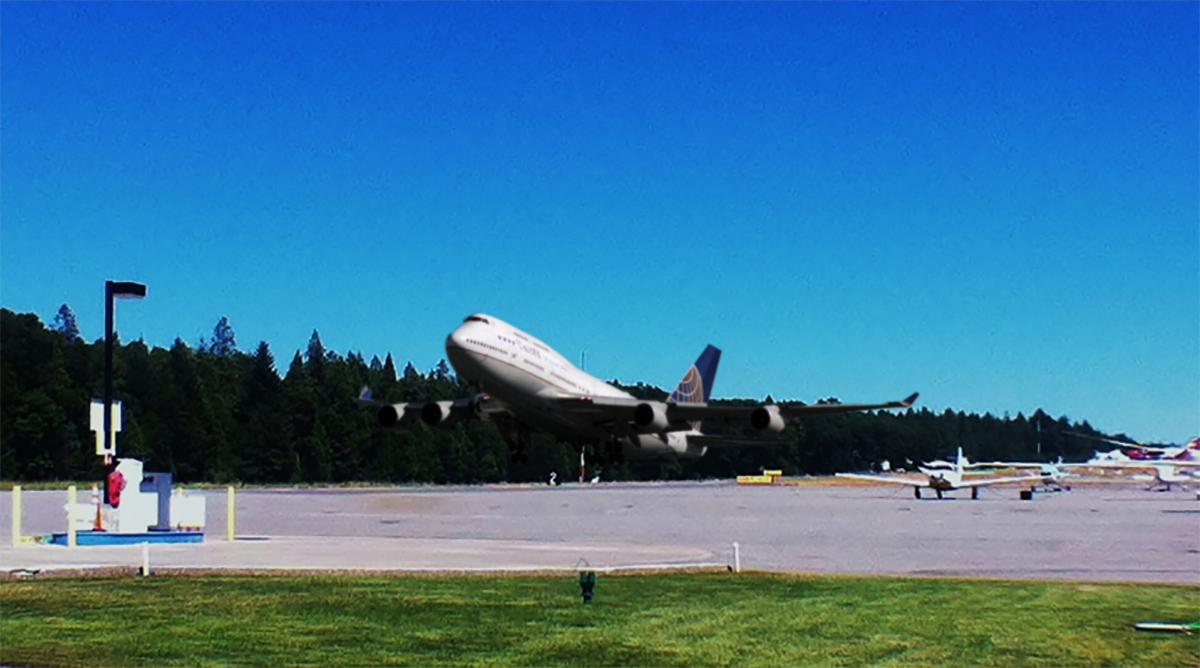 Nevada County, CA — Businesses in and around the Nevada County Airport on Loma Rica Road did more than a doubletake on Saturday with United Airlines Flight UA561 bound for New York and made an emergency landing.

The 747 departed San Francisco International Airport (SFO) on time at 10:35 am with a flight plan taking it through JFK airport in New York City and then onto Frankfurt, Germany. However, about 8 minutes into the flight, several alarms sounded in the cockpit, with many contradicting one another.

“The warning system told the pilots, among other things, that the landing gear was both up and down,” said United spokesperson Bethany Millbright. “There was also an alert from the air defense system, which is only installed on Air Force One but is a muted function on commercial 747. So we’re looking into why that system was even activated.”

At first, Captain Carl Hedon and his First Officer Dane Wigglysen ignored the alarms, as is often the case with these older planes.

“Sometimes, you just gotta give the console a little tap when a light goes on,” said Captain Carl scratching his head. “So I told Dane to give landing system lights a good whack. Which he did, and they didn’t turn off. So I tried, and that’s when the ADS (auxiliary defense system) started telling us we had an incoming ordinance. Which was weird on many levels.”

At 10,000 feet, Captain Carl decided to land the 300-ton aircraft as soon as possible. Having flown several “environment augmentation” missions from Beale Air Force Base decades ago as a military pilot, Hedon knew the area well.

“We used to restock our aircraft in Nevada County for our environmental engineering sorties,” continued Captain Carl. “So I knew the airport well. But landing a 747 is a whole ‘other thing. But I figured we had no choice.”

Hedon decided to land the massive plane on the 4300ft runway, nearly 1/3 as long as a 747 requires. Co-Pilot Wigglysen expressed his concerns to the veteran pilot.

“I know Carl flew in and out of Afghanistan after 9/11, not to mention all of his geoengineering sorties over the years, but that airport was not big enough. So I recommended we return to SFO, but I was overruled.”

As soon as Carl decided to land Flight UA561, Wigglysen announced to the cabin that the flight planned “to make an unscheduled stop in Captain Hedon’s old stomping ground.” He also said that this detour was temporary and that they’d be back in the air “in a jiffy.”

When the flight attendants instructed all passengers to “prepare for a rough landing, Groans turned to gasps.”

“All I know is everything was going fine, and suddenly we were landing,” said passenger Maddy Loons who said she spilled her coffee as the plane made an abrupt descent. “Someone shouted that we were going to land on a farm or something when everyone started freaking out.”

Captain Carl could land the 747 without incident, despite the short runway. After refueling and safety inspection, United Airlines said that the crew left the Nevada County airport without incident.